Last couple of times I was up on our mountain I was on a sheep rescue mission and two days later doing an autopsy. The time before that, in July, I was acting the goat sheep-dog nudging six of our sheep to the 'mountain gate' to bring them down for shearing. Perhaps foolishly we sent them straight back up the hill after de-fleecing and they've been there ever since. On Sunday morning, we drove East, parked the car about 6km from home and set off through the forestry to visit the far side of the mountain whither we believed our ewes would have gravitated. To hang out with their former flock-mates, y'understand. By great good fortune, on the side of the hill, we met Martin our friend and neighbour and previous owner of our ewes. He was being a real shepherd: moving his flock from a place that was obviously eaten out to an area which seemed more nutritious. We talked of the weather, and pitied the ignorance of The Man who made up the grazing rules by poring over Sheep Shearing Herding and Grazing Management for Absolute Novices [know in the trade as Sheep SHAGMAN] at his desk in Dublin. After that bit of neighbourliness, we set off uphill to find our sheep. Contra SHAGMAN, this is the reality of managing sheep on the open hill: 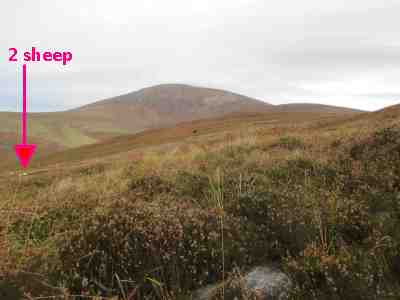 I've identified the two sheep in the field of view that are sufficiently close to resolve as a single white pixel each. I was tasked to identify our ewes from a) white face b) two letters LB on the left haunch and a big blue dot on the back of the head; the letters are much smaller than the whole sheep. Even with binoculars and a steady hand, you have to get near to be sure of ID. Getting almost near enough to spook any self-respecting mountain sheep and have them disappear over the horizon. Much sooner than we had hoped, I found two of ours hanging with two of Martin's. That was a good sign because they might all leave the mountain together when Martin brought everyone down for the winter in a couple of weeks time. Then entering stage right, a 3rd member of our flock appeared positively running across the face of the hill accompanied by two black faced, horned, and shaggy yearlings. "Why is she running?" asked The Beloved. "To escape the attentions of two black hearted, horny, shagging yearlings" I suggested. I think we may expect lambs 180 days from now. Pedigree? I don't think so!

After that partial success, we went home for Sunday Brunch. Fortified by that and several cups of tea, I sprang into the saddle of Dau.II's bicycle and rode off to the next townland to collect the car.
Posted by BobTheScientist at 07:23