Word-a-day had a week of words related to the eye, one of which was ullage where the eye-connexion was less obvious than the others: prosopopeia; ullage, trompe l’oeil; ocellus; red-eye.

Ullage n. the amount by which a vessel is not brim-full. From the Old French verb ullier to fill a partially empty flask; from the old N French oel a bung-hole from the Latin ocellus.

Some nice comments: From Stan Brown at Dartmouth "Our father, a physics professor and amateur winemaker, lobbied to have the new guest room addition to our house dubbed The Ullage, as in “the space into which extra is poured” 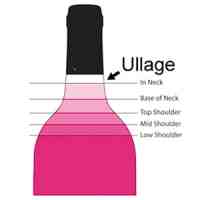 Did you know that you leave a small airspace in the top of wine bottles from the same reason you leave a gap between consecutive railway rails and slabs of concrete in roadways. In all cases the coefficient of linear expansion specific to the material will cause more or less expansion as the temperature increases. You don't want corks to pop, rail-lines to buckle or concrete to crack because the expanding material has nowhere to go. The amount of ullage - in neck, mid-shoulder etc. - gives clues about the amount of time your plonk has been in the bottle and/or how well the contents have been stored.

Ullage is a down-side in melting and sterilising agar in an autoclave. IF you make the beginner's error of shutting tight the lid of your pyrex bottle of agar ANDIF you open that bottle still hot from the autoclave THEN the pressurized air gap will explosively decompress and shower the surroundings - lab-coat [phew!], neck, face, safety-glasses [phew!], ceiling - with thick sticky molten agar at about 100oC. I was reminded of our last such incident yesterday because I was giving another lesson in correct autoclave usage to another of our supposedly autoclave-competent final year project students. I was able to show her the ceiling splatter. Such accidents are easily avoided by cracking open the lid of the agar flask prior to heating.

Ullage is important in shipping bulk liquids like oil. Crude oil is super viscous and is typically heated to facilitate discharge. Heating will increase the volume, so you need to leave a space at the top of each tank so that the crew don't slop oil onto the decks and, worse, into the sea. You want to leave the minimum ullage consonant with safety because a) you want to max the load per voyage b) free surface effects of slopping liquids at sea have a disconcerting habit of sinking ships like the Herald of Free Enterprise. Soundings / gaugings are taken twice a day when bulk carriers are at sea. You need to know asap if there is any change in levels. It could mean loss of cargo with financial and polluter-pays consequences OR it could mean water ingress with days in a life-boat consequences. The language is curious:


Related to ullage is the "Angel's Share" in whiskey production; this is the loss of fluid, mainly alcohol, through the fabric of the oaken casks in which whiskey matures for so many years. It can amount to, a non-trivial, 2% by volume each year! Diageo, the megadistiller, apparently wraps their wooden barrels in cling-film to minimise the loss to Angels - and make their products taste sweaty??
Posted by BobTheScientist at 07:28