I've started my final year research project students off on their 20 week sojourn at the frontiers of science - discovering things that nobody else knows. This year my numbers are down to nine but numbers are down across the board, so it's not (entirely) all about me. I fielded a question from the immunology-of-tuberculosis chap who is currently reading like mad about his chosen field. "If Mycobacterium tuberculosis which causes bloody sputum and a lingering <coff> <coff> death in people and Mycobacterium bovis, which does ditto damage in cattle, are 99% identical? Why do they have different names?" That's a damn good question which I've been asking people for the last 15 years and hasn't yet gotten a satisfactory answer. The same day I had that question I came across a very similar situation from 100 years ago, which concerns one of those extraordinary women who, in far less equal and inclusive society that we have today, carved out a niche in the cliff of science and made ground-breaking discoveries from that vantage point. 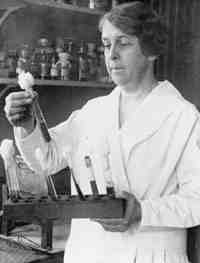 I speak of Alice Evans [L] who earned her B.S. from Cornell in 1909 and an M.S. from U. Wisconsin at Madison the following year. Bear in mind that, despite being an adult and highly educated, she wasn't entitled to vote in those distant times. She had the opportunity to carry on for a PhD, they begged her to do a PhD but she just couldn't afford any more education and instead secured a federal job working for The Bureau of Animal Industry (Dairy Division); initially in Wisconsin and latterly in Washington DC. One of the problems which she worked on  was the causative agent of undulant fever or Malta fever which some suspected came from goat's milk. This was years before DNA-based diagnostic tests were invented; indeed 40 years before the structure of DNA was revealed by Crick and Watson. The main identification tool was the microscope, coupled with Gram Staining which had been around since the 1880s. The shape of bacteria, which you could observe, was treated a key diagnostic feature; which turned out to be largely irrelevant for categorisation. A good example of streetlight science. 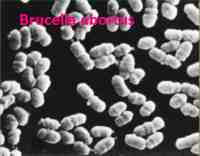 David Bruce, a world-roaming Scot, who discovered the causes of African sleeping sickness - Trypanosoma brucei - was also working on Malta fever which he observed as spherical and so assigned to the genus Micrococcus. Meanwhile Bernhard Bang in Denmark had isolated a rod-shaped microbe strongly associated with an outbreak of spontaneous abortion in cattle which he binned to Bacillus, which much later came to be known as Brucella abortus [R very short rods especially immediately after cell division]. Alice Evans looked at numerous cultures of both 'species' grown under a wide variety of conditions and basically couldn't tell them apart. Interestingly she observed them as both spherical and rod-shaped morphs depending on the growth conditions. Her paper laying out the results was published in 1918 and met with near universal skepticism. Evans was correct nevertheless, despite being a woman and not having a doctorate.

Almost immediately afterwards, everyone around her was engaged in the epidemic of Spanish Flu which killed 20 million people worldwide in the months after the Armistice. Alice Evans herself felt crook at work one day, realised she had probably contracted the disease, went home and took to her bed for a month. No 'flu vaccines back then, you just had to tough it out. One problem was that nobody could reliably identify the causative agent. The gamma-proteobacteria Haemophilus influenzae was so frequently isolated from 'flu patients that it was a strong suspect, but a red herring because, as we now know, Influenza is caused by a virus. That is another example of how the most obvious feature in the landscape turns out to be irrelevant. Maybe it's not too tendentious to find a moral or a metaphor for the current obsession, which the best of us are trying to shake loose, with gender and skin colour as the defining criteria for worth, talent, intelligence, ability to throw a baseball, or run a business.

Evans' interest in brucellosis was not satisfied with identifying the cause, so she shifted her duff to the Hygienic Laboratory across town. Her new place The Division of Pathology and Bacteriology later evolved into the NIH. And I'm getting much of this information from an autobiographical memoir, by Alice Evans typed up, in 1963 when the author was 82 years old, on a really crappy manual typewriter and now captured as PDF by the NIH Office of History. Her researches into the epidemiology of brucellosis started a long long trek to eliminating it from both cattle and people. The disease was eradicated in Malta as recently as 2005. Shamefully it took until 2009 for the same declaration to apply in Ireland. Her evidence, culled from the literature and from her own researches that brucellosis was frequently transmitted from cattle to people was rigorously opposed by The Patriarchy of the day in which the dairy industry was in cahoots with some of the Big Boys of Bacteriology. This was especially true of Dr Theobald Smith, a Professor at Harvard and the Rockefeller Institute and a pioneer in tick-borne diseases [whc prev], Salmonella infections and anaphylactic shock. He spent about ten years of his life in steadfast denial of Evans' evidence and making it his business to snipe at her work behind her back. When eventually the overwhelming tide of fact put a stop to his gallop, he never found the grace within himself to apologise or admit that he had been wrong. It mattered because brucellosis was hard to diagnose accurately and was therefore quietly but relentlessly knocking $100 million a year off the value of the beef and dairy industry while Smith maintained stoutly that there was nothing to see here.

One of the studies Evans carried out would absolutely fail the informed consent ethics rules today. Evans and here team got access to 500 blood samples submitted to the Hygienic Laboratory for a Wassermann test (for syphilis). They tested these samples for Brucella and found about 3% positive; implying that this potentially dangerous bacteria was much more widespread than previously believed. You can't nowadays just use somebody's blood because it is sitting in a freezer in the basement of your place of work.

Perhaps inevitably, despite astute and rigorous precautions, Alice Evans eventually unwittingly took one for the team by getting infected with Brucella. It persisted as a chronic infection undulating between her feeling reasonably fit with feeling like death warmed up. It was many years before she was diagnosed and the suspicion of malingering or neurasthenia aka chronic fatigue syndrome was finally scotched.

To bring this Blob full circle, Alice Evans' memoir also recounts how Robert Koch, early paragon of microbiology, was largely responsible for asserting that the two strains of Mycobacterium were quite different species and the bovine strain just couldn't infect humans. He was wrong. The proof of the pudding turned out to be in the drinking and human tuberculosis was given a severe knock when  authorities started to clean up the dairy industry and/or insisted that milk must be pasteurised.

More Women in Science
Posted by BobTheScientist at 08:24