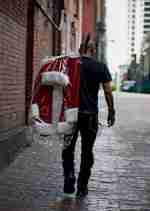 Hmmmm. Christmas - 'tis the season to be jolly. But being jolly for a day, let alone a whole season is, like, work. But I've been having some ideas on some of the problems. In any case, the Jollity eventually comes to The End [R going home after the last Ho Ho Ho].