The road to mutton quad

Sunday last I went on a bit of a journey down the rabbit hole and came up in a happier place. Saturday we were at a family Thanksgiving dinner that couldn't be beat at Pat the Salt's, with his collaterals (not many left) and descendants.  We were specifically doing family, solidarity and gratitude that one of our number was now in remission from cancer.  The family that's in it is famous for the vast number of unexpected guests who are catered for so Saturday was a mill of chopping and mixing, braising and stirring and finding enough chairs for 17. It wasn't until Blob-launch on Sunday morning that I realised that 300 people had been shot to death in an Egyptian mosque.  It reminded me of how we used to behave in Europe when different Christian sects killed each other over whether the deity was three-in-one or just three. Arnaud Almaric's way of separating the nontrinitarian Cathar goats from the orthodox 3in1 Catholic sheep at Béziers on 22 July 1209 was neca eos omnes, deus suos agnoscet - kill them all, god will acknowledge his own which I've cited before .

It turns out that, in solidarity with the atrocity in Sinai, the Library of Birmingham decked itself in the colours of the Egyptian flag. Why ever might the city fathers do that? Because B'ham is home to the largest concentration of Muslims in Britain. 22% of the Metro 2 million identify as Believers, edging out non-believers at 19%. Christians are still the majority at 46% but not in the majority, if you get my meaning. Especially not if practice is accounted: only 800,000 = 1.4% English people attend the Church of England regularly.  The Brummy Library otoh is the largest public library in the UK having been opened only 4 years ago right in the city centre adjacent to the Civic Offices. In the plaza outside is a lovely simple sculptural tribute [below] to John Baskerville the typographer who lived on the site  causing the current building to be named Baskerville House. The sculpture simply prints virgil in massive 'type' of bronze letters on white Portland stone plinths. The word is flanked by two mutton quads = em quads = big spaces which have "Industry & Genius" carved on the side of one and John Baskerville on the side of the other: 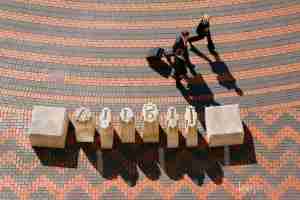 Why Virgil in this context? Because Baskerville (1706-1775) was  famous in his day for producing an edition of the Eclogues which happens to be a favorite book of Pat the Salt despite the fact that he never learned Latin before he ran away to sea in 1939 aged 14. A tributary chunk:
Virgil

Say on then, since on the greensward we sit,
And now is burgeoning both field and tree;
Now is the forest green, and now the year
At fairest.
John Dryden paraphrase

The trees are clothed with leaves, the fields with grass;
The blossoms blow; the birds on bushes sing;
And Nature has accomplished all the spring.

If we could have more birds n bushes and fewer guns n mosques, I feel we'd ALL be happier.