I have an understandable interest in Bobs: Bob the Island - Bob the Point - Bob the Province - Bob the Builder - Bob the Asteroid - Bob the Socratic - Bob the Gypsy - Bob the Thunderer - Bob the Farrrrmer - and I see that Bob the Blob [R] is a thing. Now we are getting Bob the pain-in-the-arse aka Sir Bob or, here ironically, Saint Bob.  I'm all for excellence and salute the outstanding, and take my hat off to experts. Personally, I'm more for celebrating the ordinary. But too often celebrity gives a rush of blood to the head, and a loss of humility. In science there are Nobel laureates: by the prize they are acknowledged expert in something. Logic, utility and respect allows journalists to phone them up for a soundbyte when something notable happens in their field. They may well have other things they care about: their grandchilder; match-box cars; Manchester City; the local library; the planet [Sulston prev]; but they don't have locus standi to pontificate about those. Being a celebrity in one field doesn't give you bragging rights across the board.

Once upon a time in Dublin, there was a band called The Boomtown Rats, who started as The Night-time Thugs until one of their number refused to play under that banner. They were very successful, in Ireland and abroad, in the early 1980s. You may remember I don't like Mondays - Banana Republic - She's so modern. You don't have to look very hard in those clips to recognise a youthful Bob Geldof before he went Global. In 1984, at the peak of his pop-stardom, he saw footage of a famine in Ethiopia and, with Midge "Ultravox" Ure put together a mammoth charity fund-raiser called Band Aid, "Do they know it's Christmas?" raised $8million. The following year they went, if not Global, at least trans-Atlantic with Live Aid, a media circus which shook $150 million "give us your fuckin' money" out of white-folk's pockets for people without pockets at all at all. No matter how tired you may be of hearing "Do they know its Christmas" again in December, I think we have to give the man credit for doing something about inequality rather than just sighing about it.

Shortly after that The Rats split up and Geldof launched into another career as ambassador against poverty, oppression and inequality, He recognised that, if left to their own devices, most people will spend their money on food, t-shirts and a Summer holiday rather than tithing [bloboprev] their income for the poor in Africa. A month after The Rats' last concert in 1986 Geldof accepted an honorary knighthood from the [Tory] British government for his services to fund-raising.  It was a peculiar arrangement: the Tory government were bullied into a cynical act of populist appeal because the Great British Public and the Great British Media seemed to demand that Geldof be recognised. Geldof, a citizen of a Republic, saw no inconsistency in accepting such an award from the Queen of the country next door. No inconsistency for the average Brit who thinks that Ireland is part of the Commonwealth because we speak English. And they could be forgiven for that belief given how much attention the Irish pay to British soaps, British soccer, Royal weddings and Britain's Got Talent.  For a while, in this century, Geldof was half of a mutual admiration society with British PM Tony "WMD" Blair. If he hadn't already gotten his knechthood, Tony "People's Princess" Blair would have sincerely secured one for him [can't find a picture of Blair looking convincingly sincere, so you'll have to imagine it].

In 2006, Dublin City Council got in on the process of canonizing the Blessed Bob by making him a Freeman of the City (whatever that means beyond a fancy scroll). My Alma Mater TCD was a bit slower off the mark: this Summer, Dau.I and I saw him a) looking scruffy and b) going in to get an honorary degree. The Freedom of the City is not showered out like confetti: they have been awarded quite a bit less than one every year over the last 140 years.
In 1999, while she was still under house-arrest in Burma/Myanmar, they offered the honour to Aung San Sui Kyi, and she flew to Dublin in 2012 to finally accept it. At the time, ASSK was revered, only second to Nelson Mandela,  as the silenced, oppressed but dignified symbol of freedom. Things have turned pear-shaped for her since she was released, especially her recent failure to condemn ethnic cleansing among the Muslim Rohingya minority in Myanmar. From the outside looking in, it's either black or white. People who were falling over themselves to shower ASSK with prizes and honours were now fighting to throw the first stone. 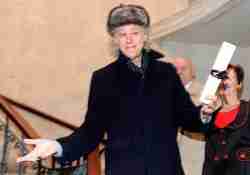 Notable among the latter have been U2 and Geldof requesting and requiring the City to rescind the Freedom they gave to ASSK in her shiny-white phase. Geldof has been unhappy about the pace at which the City Fathers were acceding to his righteous indignation. In the middle of November Geldof [R with worshippers] brought himself, his scroll, his publicist, and plenty photographers back to Dublin to return the honour earlier accorded to him. The City Council, led by the Lord Mayor Mícheál Mac Donncha didn't like being chivvied by a publicity hound and this week overwhelmingly voted to accept Geldof's resignation  . . .  at the same meeting where they stripped the epaulettes off ASSK. Now Geldof is all upset and wants them to put the scroll back in his pram.

The day after that stormy Council meeting, Joe Duffy, RTE's self-regarding talk-show host, in one of his periodical fits of righteous indignation, "interviewed" the Lord Mayor. Which amounted to him hectoring that Civic Dignitary for being a Sinn Fein Republican and for daring to express his contempt for an Irish citizen who accepted a gong from a foreign power . . . especially that foreign power. Clearly there has been a bit of needle round the Council table and Geldof is not everyone's cup of tea. Simple people want life to be simple: Saint Bob is, or was, Good; Sir Bob is definitely Bad; Unscrolled Bob is . . . heck I neither know nor care.
Posted by BobTheScientist at 07:46