I haven't a clue

Somehow along the way, my teaching portfolio at The Institute has acquired a bunch of maths & stats classes. You can't call a first year class Remedial Maths - it really wouldn't look good on the prospectus. But heck'n'jiminy, many of the students require it. Every year I have a pre-quiz which inter alia asks for their grade in Leaving Certificate maths. The median (most common grade) is a D at Pass level. This is the bare minimum and an absolute requirement for entering 3rd Level Education. The optics being important we call this one hour a week practice in mathemactice Quantitative Methods or QM. A tuthree years ago, the Sporty side of my department renamed the euphemism QM as a more aspirational Research Methods aka ResMet; neither curriculum nor content changed underneath the rubric. 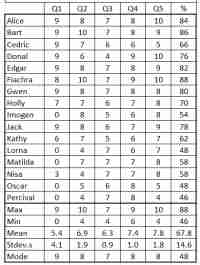 Whatever foundation we lay in Yr1 ResMet, someone else has to construct the edifice of ResMet2 in second year. I don't know if it's a mix&match policy (to spare any one group of students from really disaffected teaching?) but I've never landed the same people as they progress to Yr2. That's why I have to learn 100+ new names and faces every year. ANNyway, I've just finished marking the Exam for my ResMet2 class, which finishes at Xmas. Everyone passed (+40%) Yay! and the range was 46-88% [alphanonymised results R]

Early in the year, I was in a 1to1 with a student and asked him to guesstimate the size of something (area of Ireland, population of Poland, number of cornflake packets in a shipping container, I forget). I could see the shutters come down as he said:
"I'm sorry I haven't a clue"
"Yes you have William" I cried, "is it 10?"
"Nope"
"Is it 1,000,000?"
"Nope"
"There! You do have a clue: it's somewhere between ten and a million"
I think I might have been getting a little shouty towards the end, because my triumphant final shout raised a muffled titter in William's corner of the room. Relief, probably, that they were not being subject to a Socratic grilling. The same initial response came out a fortnight later, but William attended every class and knuckled down to learning what was required. He got 86% in the Final Exam.

Across the room on another week, I was expanding on the attributes and prevalence of the Normal, Gaussian, Bell-curve, Distribution to try to make the business of calculating the area under the curve more relevant . . . and  therefore more accessible. After listening to as much of this as he could bear, with scrupulous politeness, the student, let's call him Rob because that's his name, put up his hand - "Bob, just tell me what we have to do here". With much chagrin, I apologised for being off with the fairies again and told him the steps for completing the task and pointed out the relevant paragraph (with added screen-shots) in the manual. For the rest of term, even when Rob was absent, I'd pause in my explanatory gallop if I saw the over-load shutters trembling "I'm sorry Rob,  I'll stop now. You don't need to know all that, you just need to know how to do this task - both the mechanics and hopefully a suitable interpretation of the P-value that the mechanics generate." And, as everyone passed, to a certain extent, it was so.
Posted by BobTheScientist at 07:36