Pat the Salt, aged 92 spent the weekend on hospital a month ago. A typical refugee in the HSE, he went in for a chest Xray [pneumonia? pleurisy? weak-in-the-wind?], spent the night on a trolley, was found a bed and eventually occupied that for three days until he was discharged as well enough to survive at home . . . he has a home unlike 8,000+ people in Ireland today. He takes a modest pharmacopoeia of meds twice a day and these have been supplied in a 'blister-pack' to help ensure that he doesn't miss or double up or forget one of his drugs.  His daughter brought the blister pack in along with the script and the receipt from the pharmacy but the hospital staff refused it because they didn't know where it had been or come from. They preferred to buy new drugs to match from the hospital pharmacy. Out of sync drugs in a half blister pack are effectively trash. It all seems a waste.

Then again, I went back to classes in Grad School in Boston after the 1982 Summer vacation just as the Tylenol Murders were sweeping the USA into a panic of epic proportions [prev]. Thereafter all meds were retailed in tamper-proof packaging and nobody else, so far, has died from cyanide adulterated drugs. You wouldn't rummage about in the dumpster behind CVS pharmacy from free drugs because you couldn't afford them from front-of-shop . . . or would you?  Actually, I don't think this is possible because pharmacies are super careful about disposal. It is getting increasingly difficult to go dumpster diving for food as well: partly because of FoodCloud and partly because of padlocks. And First Responders pretty much have a policy of not accepting food gifts from the public; or rather accepting gratefully and putting the cookies straight in the trash.

I'm a bit of a bargain-hunter. It goes the with beach-combing, I guess. I'd rather buy a book for 0.01c than for €8.99 and have been known to buy books simply because they were too cheap to refuse. But not anymore, I'm done with stuff and am down-sizing the library: 95% of which has been acquired below retail cost. I wrote a while back about book warehouses and the 0.01c trade. Part of me is surprised at myself that I would give house-room to something whose provenance is so murky. What if the previous reader habitually failed to wash hands after going to the bathroom? I am shocked at how much food, bought in The Institute canteen, goes straight in the waste bin . . . but I don't reach in a fill up on cold french-fries. So I guess I have standards. The Beloved has standards too: she washes new bought clothes before she will allow me to wear them - it's the coliforms from the sweatshops, silly. And money is indeed filthy lucre. 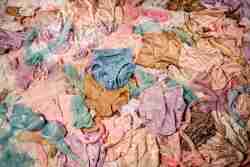 Here's a nice essay on how items that are returned to US stores [brick and on-line, both] are dealt with. Amazon, CostCo and Walmart have sale-or-return policy for pretty much everything - including underwear [R a sea of knickers pic Holly Andres]. These big-box stores also have to deal with lines of merchandise that just aren't selling [quick enough - turnover is king]. So they sell them as pallet-loads to entrepreneurs who have bigger warehouses; more employees with rubber gloves; and better contacts in the bargain hunters world. via MeFi where comments are instructive and diverse. Many of the secondary buyers are prepared to pay folding money for a pallet, or a container full of stuff without seeing any more than the label, let alone handling the stuff.

Did you know about Mystery Boxes?  It's a thang: you pay $10, $100, $1000 for a Mystery Box on Ebay and then film yourself being disappointed that the vendor saw you coming. Here's Lucas, who is moderately funny about dropping 3x $20 in the post and getting trash in return. You're on your own watching dopey people $pend more: there's hundreds of these vids out there. Then there's Storage Wars on the TV.  Making and selling shite that nobody needs is what The Economy aka The Despoilation of the Planet is all about.
Posted by BobTheScientist at 07:16