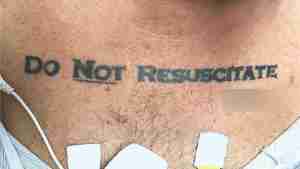 Hello? What's not to understand!?  How much clearer do I have to be while unconscious? To a hammer everything looks like a nail; to an ER physician every body cries for intubation and CPR. Almost every time, the person in scrubs wins the dispute. The story, presented as case notes in the NEJM, and picked up by George Dvorsky at Gizmodo and then liked by Neatorama, is that an old chap presented at a Florida ER department a) unresponsive and b) with a signed DNR tatooed on his chest. The ER team intervened aNNyway, because that's what doctors do: decisions, especially those which result in direct action, become [as in are fitting to, but also as in create] a successful medico. But they also had the humility to send a note to the hospital ethics committee. The ethics committee decided that the tattoo was a clearly expressed wish and that it was silly - and wrong - to search for the next-of-kin especially as the old chap presented with no ID.  When my friend and mentor Lynn Margulis had a stroke, her daughter had to fight to get the medical team to heed her mother's clearly expressed terminal care wishes. NEJM

I've been to end of life issues before, and before that, and written a living will; but I haven't gotten the dnr tat yet. They're very expensive, tattoos, maybe I should get a permanent marker and draw a DIY DNR. That way, if I get "tattoo regret" - yes it's a thing - then I just have to scrub regularly or wait to exfoliate. The current advice is don't call the ambulance when you or your aged loved one has their last crisis. If you do, the professionals will do what they do intervening to save lives, even if if means breaking ribs during CPR or stuffing tubes in every orifice and making new holes to take yet more tubes. It is a living for the paramedics, nurses and doctors but it can be ghastly for the Principal on the gurney and eye-wateringly wincing for the attended loved ones. The trouble is knowing which is the last crisis, because most of us would like to see Mum back in her own home patched up for another while.  The last death - at home, in bed, a blessing - I was involved in, the family had to push back quite hard to prevent the corpse being taken to hospital to be pronounced dead. Most deaths occur in hospital and outsiders (GPs) are getting out of the habit of writing death certificates. You can't get the locus or the Care Doc to sign off, it must be the deceased own doctor. Shucks, nobody says that death is easy but it's going to happen for sure; so let's not make it more difficult than it needs to be.
Posted by BobTheScientist at 07:22