"Limburger"
You can spend a lot of money on cheese or more modest amounts. Experts can tell the difference. Whichever, whatever, I love the stuff, since I was first exposed to different cheeses aged 8. I've had a good bit to say about cheese on The Blob 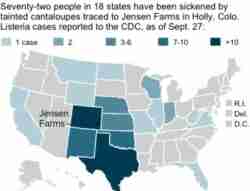 While it may be safe to eat the rind but it's not always safe to eat cheese. The main problem is Listeria monocytogenes. This Gram-positive bacteria grows well in the presence or absence of air. It is common enough in the soil, and so is spread by plants that have contact with the soil. We're still pointing at canteloupes because a 2011 outbreak of listerosis was associated with that fruit [map R]. That deadly incident dealt a serious blow to canteloupe farmers in Colorado and elsewhere in the USA, but it was a once-off as far as Listeria and canteloupes are concerned. It's easy to wash the fruit - ammonia or ethanol will do it - because it is big and nobody eats the rind so you'd be ++ unlucky to get sick from that source. 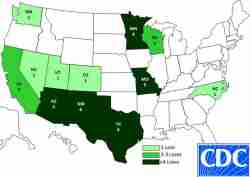 Another once-off food contamination scare happened in the run up to Christmas 2014 with toffee apples [L for cases map]. The problem with apples is that the Listeria can lodge in the holes at each end. But that's okay because most people [self is excepted because I eat apples pips and allll] leave the 'core'. The toffee-apple case was unfortunate because driving the stick up the apple's oompah transferred the Listeria to the anaerobic interior of the fruit, where it grew anaerobically.  But most of the outbreaks of listeriosis recorded by the CDC in the last ten years have been caused by cheeses of various sorts.  A useful graphic for the process of determining  which puka-puka people are part of the same event.
Listeriosis could be a case study from Risk Assessment. This is the idea where you have balance the likelihood of an event and its severity to decide what sorts of events are worth preparing for or acting to avoid. Risk is usually defined as the product of the likelihood and the severity. Salmonella and Campylobacter contamination of food is common but 'case fatality rate' is only 1% while Listeria is much rarer but 25% of contractees seem to die. This is why health professionals talk large about Listeria. But the talk is always in the context of small babies (and late stage pregnant mothers; the elderly and those who are immuno-suppressed including those with AIDS and those who've had a hearth, liver or kidney transplant. That's because the rest of us has an immune system which can duff up Listeria before it gets started and that's why Listeriosis is rare.

Listeria is also a problem because of the wide range of temperature at which is grows. It is happy to go forth and multiply at 37oC but will also grow and divide at 4oC. That's what your fridge is set to! Cooling food and left-overs is a really effective strategy for slowing the growth of E. coli, Salmonella and Campylobacter. But cold-loving  'psychrophiles' like Listeria and Pseudomonas won't be bothered by the chill. It would be stupid to throw up your hands and say "Why bother with a fridge?" because that controls the growth of the vast majority of food spoilage microbes.

From pasture to plate
Posted by BobTheScientist at 07:46