The Thursday before Christmas I drove up to Dublin for a twofer: a) to attend a multiple class reunion at my Alma Mater b) hammer-time with Dau.I. Part of the arrangement was so I could drive m'daughter and her Chrimbo-kit home to the mountain. Presents; books; the contents of her fridge; things you can only buy in Dublin; things you can only buy in Ikea. The (a) deal was to have mince-pies and drinks with the graduates of the place where I obtained my marginal first degree: kick-off 1630hrs. I reckoned that none of the organisers would imagine that name-badges would be necessary (we all have our marbles and are just one big happy family): so I made my own My name in letters big enough to read at 1 metre distance and 1977 in enormous letters. 1977 is the year I graduated and so almost all the alumni were waaaaay younger. Blimey, that's 40 years ago.

I was running a little late because I dawdled through the front of Trinity College but I was in no hurry. Which meant I missed the first half of a short talk by one of the department's more successful graduates. They couldn't do name-badges maybe, but they had arranged for two (2) chaps half my age to give career advice in the guise of outlining an autobiography. Fairy 'nuff, even I was just yesterday suggesting that a young woman-of-science was a better mouth-piece for advice that an old silverback who has never snapped a chat or insted a gram. Nevertheless, on the principal that it's not over till it's over, I thought I could give an overview of a career in science which wasn't still wet behind the ears. For starters, it might be disheartening to have both barrels of career propaganda loaded with the super-successful young buck-shot: there are more, and necessary, careers in science than just The Winners. The prima ballerinas need people to do the heavy lifting: technically competent and tolerant of boredom. 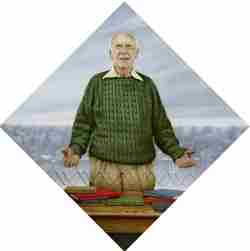 The second guy to talk went a bit outside his brief to harangue us about the fact that something is rotten in the state of science. First off he pointed the fickle finger of scorn at the peculiar messianic portrait of James "Double Helix" Watson by Robert Ballagh which looks over the atrium of the Genetics Department [R] like The Lord offering his works to communicants. "That man is a racist" intoned our young speaker.  Yes yes, we know that: Dr Watson in his declining years has become less and less able to button his lip about the deficiencies of people other than straight white males who have won a Nobel Prize aka SWMNPWs. Young feller next had a go at sexism in science, citing the scandal in Rochester U with alleged serial sexual predator Florian Jaegar and asserting that nothing like that was going to happen in his new ERC- and SFI-funded lab. These two broadsides caused a certain amount of discomfort in the room: racism  and sexism happens elsewhere. We don't like having them shoved down our throats when we are parched to get access to the drinks table and shove down a mince-pie or two. But I don't fault him for bring up an edgy subject in Christmas week - you would have a heart of stone to walk past a homeless person as you do your Christmas stuff-shopping. And we know that a lot of sexual predation is going on in the stationery closet during year-end office parties across the world.

aNNyway, after the speeches, the mince-pies and gargle, the catching up and the networking and the chit-chat, I met up with Dau.I and we drifted off to skull a few pints. I tried to give her the gist of the polemic on cleaning up science that I had just heard. I also noted that we-of-the-atrium didn't have to travel as far as Rochester NY to encounter an egregious example of continually tolerated misogynistic bullying. I wrote that last link 4 years ago and the perp is still in place, still treating people, especially young women, with contempt. Harrumph, Dau.I snorted, if that young feller wanted to make a stand against sexism in science, then, rather than sounding off as a SWMERCSFI, he could recuse himself and ask a female colleague to give the career-advice holiday pep-talk.

After a couple of pints we decided to order some pub food of which there was a copious choice. One of the interesting items on the bar menu was a Full Irish Chicken Baguette. What the hecken can that be? Sounds like 75cm of french bread filled with the meat, white and dark, from a 1.6 kg chicken, with two fried eggs, three sausages, one grilled tomato and a generous ladle of baked beans. That sounds like mother of all sandwiches, a LDL-cholesteroll for the end of times. But I went for roast loin of pork with stuffing; roast, mashed and boiled potatoes; red and green cabbage; a side of carrots; and, because there was no more room on the enormous plate, a gravy-boat full of apple sauce. Let the Christmas over-eating begin!
Posted by BobTheScientist at 07:38