Usedom on the edge

There was a time when the Baltic was the centre of the world criss-crossed with trade routes bringing salt, herrings, furs, turpentine, masts, grain from one place to another. Last year I wrote about the Hanseatic port of Lübeck on the Ostsee / Baltic coast as a way station on the Alte Salzstraße. But the Baltic barely featured in my very expensive education, I guess we pitied the people of North Central Europe who had to take holidays on the Baltic Coast, which seemed pretty bracing if not positively bleak. As if an April day on the beach at Tramore or Duncannon was in some sense more easy on the chillblains. But the details of the geography were entire outside the curriculum. I read a rather intellectual (but short!) piece of about Borders as a reflection on the politics of hard/soft borders after Brexit. via MeFi where extra links. Until then I'd never heard of the island of Usedom which is a)  part of the Baltic coast and b) interestingly, divided between Germany and Poland. Don't forget that the whole of Poland was shifted West in the wake of WWII to please the Russians and discommode and displace the Germans. Honestly you wouldn't know where what who you were if you lived anywhere close to where Gregor Mendel was born. 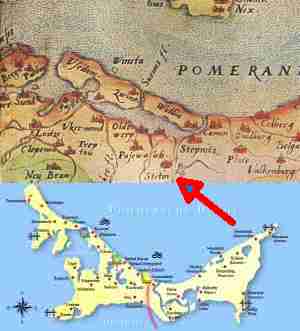 So here's Usedom/Wollin as an Olde Mappe which rather exaggerates the islandness of it all. The real current island is much more embedded and connected with the coast, so that it is hard to see where the Mainland ends and Island begins until you zoom in to the places where roads appear to join the two. The explanatory cartoon below shows the tortuous coastline of today; albeit totally detaching the island from the continent for clarity. The pinkish slash about midway indicates the border between German & Polish Pomerania that would be Mecklenburg-Vorpommern \\ Województwo zachodniopomorskie.
I've taken the liberty of indicating Stettin = Szczecin on the upper map. Why? Because it boggles my mind how a town so far from actual Baltic could have become such a major player in the Hanseatic League. An indication of its importance / desirability is the fact that, after being founded by Wends in the late 700s, it was successive part of  Poland, Saxony, the Holy Roman Empire, Greater Denmark, Sweden, Prussia, Germany and most recently Poland. 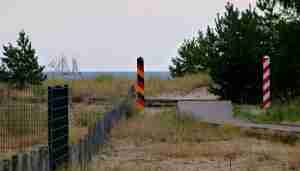 For reasons of geopolitical importance at the 1945 time, the border between Germany and Poland was not set along the Swine/Świna the middle of three drains between The Stettin Lagoon to the South but through the countryside West of the metropolis of Świnoujście. Thus giving control of both banks of the thoroughfare to Poland. German traffic had to winkle 20km through the Peenestrom between Usedom and the mainland. Polish ships had the choice of wending along the Świna OR the Dziwna to the East of Wollin. This years-ago economic decision makes for a rather less defensible border between the two countries which meanders through the dunes and salt-marsh [R] until it gets its feet wet in the Baltic. Unless we're going to suffer Plexit after Brexit, I guess we don't need to worry about the defensibility of the DE-PL border here or further South.
Posted by BobTheScientist at 08:12