True self, finding of

I wrote a few years ago about my neighbour who, though born a sheep-farmer with hectares attached to his patrimony, became in his middle years a stone-mason . . . and found thereby fulfillment if perhaps not unalloyed happiness. I noted there Bill Bryson's epiphany that, despite being born in Dumpy, Iowa he was at heart a European whither he went as soon as ever he could.  But these boys are the exception; almost all of us get trammelled by our class and culture, education and upbringing and plain geographic inertia and finish up growing to look uncannily like our parents. For people like me, the expectation is that you go to University because your whole class is going there like a platoon: exchanging the school uniform for another set of cultural and clothing norms. Damned difficult to kick over the traces and become a hair-dresser, lumberjack or carpenter. Likewise it's hard enough for the son of a chippy to land a middle-class job teaching in The Institute.

This is why I find stories of people, men and women, who reinvent themselves as adults so inspiring. When I was failing-to-thrive in my second year in college, I talked about dropping out to become a carpenter, but only got as far as looking wistfully through the window of a place in Temple Bar, Dublin called Rough Deal which made kitchen tables and similar robust items of practical furniture. As my only qualification was having made a remarkably uncomfortable chair out of a tea-chest, I doubt if the shop would have entertained my fantasies. I'm not a carpenter, I'm more of a generalist, a bodger in a few fields but insufficiently focused to make a living from any of them. 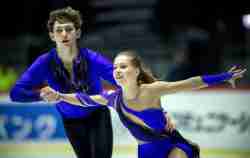 Here's a wonderful story about a boy from Sydney, one of the indigenous dispossessed, who by accident became an ice-skater and is now shaking the world of figure skating by its diamanté lapels. A very large part of skating is about physics - you spin slower if you throw out your arms & you need to be close to the ground - and there is a certain amount of being the right size to succeed. When Harley grew too tall to be a likely soloist, his coach made him try mixed doubles. Nobody in his orbit, nobody in Australia, could be found to match his style but the networked themselves to Moscow and tried out with Екатерина Дмитриевна Александровская. He is tall and has ears like sails, she is short and has a blond pony-tail, together they are MAGIC. It's insane what they expect girls to do in this circus: zing at 40km/h across a cold hard surface 2.5 metres high and upside down, supported on one hand by a chap she'd never heard of two years ago. Here's just one clip: Gdansk 2017. What I find amazing is that they can travel in parallel at turbo-speed without looking at each other - they just know whether the other is. And reflect that, when they met they were monoglots: she Russian, him English. The throwing each other in the air, the spins, the jumps, the stops, they're just razz-ma-tazz; the key thing is the trust, the empathy and the courage of young Екатерина.
Posted by BobTheScientist at 07:31