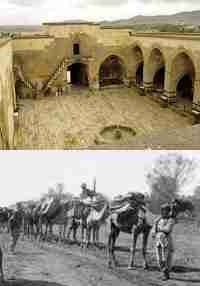 A sad day, yesterday morning for the de-gathering of The Clan. Since the Night Before Christmas, our humble mountain home found room for the descendants: The Boy and his partner; Gdau.I [6], Gdau.II [2]; Dau.I, Dau.II & her feller in addition to The Beloved and Himself. They all came bearing gifts, which were exchanged, and have now loaded their camels and moved off in all directions.
As opposed to a real caravanserai [L empty after the last departure], with 100 sq.m. of floor space, we have a comfortable 9 sq.m. each. That's 3m x 3m each and the roof doesn't leak, which is a lot more than Syrian refugees are getting and they probably don't have a sound roof. It rains in Lebanon and Turkey but it must be wetter and colder in the Calais Jungle [prev] which is still inhabited after being 'razed' in 2016. Of course, we are all grateful to have all the family present and accounted for, the t'ilets working, and plenty of food. It would be churlish indeed to gripe about too much food. But, with a lot of enthusiastic cooks in the family, I'm going to work my way through a fridgeful of left-overs before they go too furry.  I really hate to throw food out and the chickens are long gone and Hoover Rashers the dog is sadly five years dead. So it's up to me! And the 9 sq.m. each is only pedantically true: our underfloor heating packed up a couple of years ago, so the only warm room downstairs is the one hosting the Waterford 101 wood-burning stove.  That room is 4.2m x 3.2m which gives everyone about enough space to sit down. But because Gdau.II is only two and Gdau.I is active, a fireguard is necessary which cuts off 1.5 sq.m. of floor-space. 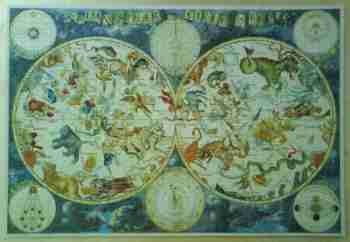 The last several years has seen the development of a tradition of doing a massive jig-saw over the holidays. If anyone is feeling idle or looking feckless, they are requested and required to put pieces in the puzzle or, if that requires too much [sozzled] brain-power, they must sort the pieces by colour and/or shape to make it easier for the active assemblers. If we lived in our ancestral pile or even in Ye Olde Rectory, we'd put the gdamn puzzle on an occasional table in one of the spare reception rooms. As it is, the puzzle has to be brought out and put away as meals and other [in]activities dictate. I, for example, need somewhere I can take an afternoon nap after another mighty dish of rissoles and gravy. We do have a felt jigsaw roll-mat [£7.95 at amazon] but loose bits tend to fall out the ends. Accordingly, two years ago, I found a dryish piece of plywood 660 x 1035 mm and duct-taped the edges against splinters. That fit the Xmas jigsaw puzzle with a comfortable margin against being jigged by an active child. In the inflationary puzzleverse which we inhabit, puzzle 2017 was Celestial Planisphere by Frederick de Wit clementoni.com [and above]. This monster has 2000 pieces and extends 668 x 975 mm, which is bigger than the board in one dimension. But nobody appreciated that until a substantial chunk had been assembled.  I had to go out in the cold and cast about for a board prosthesis that was long enough, wide enough and the same thickness as the existing board. And it was so: even if it meant getting under the board like a car-mechanic to assemble the extension.

The small print on the bottom of the jigsaw box says in 15 languages: According to European Regulations on games, a puzzle with more than 500 pieces is not considered a 'toy'. Indeed not, such things are a penance!

You may imagine that the gdamn puzzle on its board also ate something wicked into the available floor-space. To get to the last available chair to read a book after another plongeur session at the dishes from the last meal, I had to <mind fingers alert> step into the middle of the puzzle. And mind the Lego <yaroo!> if you operate a shoe-free house. They never did finish the puzzle, there are still 119 unincorporated cluelessly dark-blue and black pieces in the box. Maybe I'll drag the board out from under the sofa and try a few random inserts. I hope y'll have a high old time tonight ringing in the New Year, I'm exhausted and will be d[e]ad to the world at midnight.
Posted by BobTheScientist at 07:26