You know what they say about women in the professions: they have to be twice as good to get half as far as their brothers. Here on The Blob, I write about a very mixed salad of topics but one of the themes is women in science, of whom I've written 60 short biographies. I do this because I want more women in science because they are another county heard from, and more diversity means more and more creative ideas about how the world ticks. I hope that some of them will be read by a teenage girl who might thereby aspire to be a top chemist or nanotechnologist. It embarrasses me when I hear, for the first time this late in my life, about a woman who has made a key discovery in science. Take Nettie Stevens, for example who surfaced in the blogosphere last week, she discovered sex-chromosomes right at the beginning of Genetics . . . never 'eard of her. Maybe my old prof ,George Dawson, who was huge fan of Barbara McClintock, mentioned her but her name rang no bell. With my training in genetics and interest in history, I shd have flagged Dr Stevens - tsk! 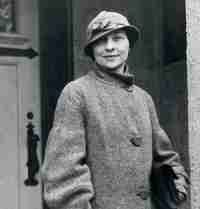 But today we're down with Elizebeth Smith Friedman [L in hat], peerless cryptographer in two World Wars.  I have a little bit more excuse there because her work was politically sensitive and for a variety of reasons was kept under wraps. Her work was also appropriated by some of the men around her. Jason Fagone discovered her a tuthree years ago as well as a treasure trove of her personal and professional papers and has just published a biography The Woman Who Smashed Codes which has been gathering rave reviews.  Easily confused with A Life in Code: Pioneer Cryptanalyst Elizebeth Smith Friedman by G. Stuart Smith. Except that Smith's April 2017 biography is trailing at 565,000th on Amazon while Fagone's September 2017 book is 1,700! Poor Mr Smith must be chewing his beard in frustration at the Harry Potterness of it.

Elizebeth Smith was the youngest in an extensive family of Quakers and grew up on a farm outside Boondocks, Indiana. She got a degree in English Literature and was all set for quotidian career as a small town school teacher until she got married. That was one of the sunnier options available for women born in the 1890s. But she yearned for something more interesting and, quite by accident, found herself deciphering Shakespeare for an eccentric millionaire on Riverdale his extensive estate outside Chicago. "Deciphering" rather than reading or studying The Bard because her boss was certain that Shakepeare's works were written by a cunning cryptographer Francis Bacon who had left clues to his identity in the texts themselves. Although it is hard enough to crack things that are obviously encrypted, it turns out to be easy to find hidden messages in documents that are not encrypted . . . if you are prone to confirmation bias or delusion. You should filter 'quite by accident' through the lens of all those people you know who are lucky because they make their own luck. It turned out that the US government of the day, in one of their isolationist phases, had essentially no cryptologists on the payroll, so they rolled up to Riverdale as and when needed.  One of the other Effectives there was a young chap called William Friedman and he and Elizabeth clicked over the codes and soon got married. In 1920, they shipped out from the Midwest and settled in Washington DC, she working for the US Coastguard.

The Coastguard was the front-line in the Prohibition War as The Mob tried to import illicit liquor in almost unimaginable quantities. You'd have to wonder what sort of a democratic decision the Volstead Act was if there was such a demand for illegal booze. The Hoods made rendezvous on and off the coast by wireless and because that was open-mike, they conversed in code. And Elizebeth was able to crack these with reliable regularity even as the Opposition increased the complexity of the ciphers as part of the arms race. Between 1925 and 1931, she worked the entire gig with only one other (female) employee. After that Uncle Sam recognised the value of the work to the extent of sending her more hands for work and training. These were almost all men but such was her demeanour and no-nonsense efficiency that “Many times I’ve been asked as to how my authority, that is the direction and superior status of a woman as instructor, teacher, mentor, and slave driver, even to commissioned and non-commissioned officers, by these men was accepted,” she said. “I must declare with all truth that with one exception, all of the men young or older who have worked for me and under me and with me, have been true colleagues and have never been obstructionists in any way.” [source]

Elizebeth was definitely of sterner stuff than her husband William, who later on suffered stress fractures in his mind. He was working to break Japanese military ciphers during the war when failure was likely to result in thousands of extra US casualties. But like Alicia Nash, she added his care and attention to the list of tasks which she had to address on a daily basis. Whenever she felt like slacking off or taking a holiday, some government department or other would rock up to her door with an unsolvable conundrum and she often found it easier to solve the puzzle than Just Say No. We only know what we know because the Friedman's bundled up their entire archive and donated them to a local library. This was after the NSA had descended on their home and seized wodges of their papers in a security sweep in the 1950s. But for the Friedman's proactive stand, everything would have been boxed up and shipped to a warehouse in Area 51, Nevada.

What I find interesting is the kind of Arts Block creativity was what was looked for in code-breakers back then. They recruited for the Enigma project by having potential cryptographers do the Times crossword. You were in if you could knock that off in 5 minutes; or if you knew the complete works of Shakespeare by heart. They were looking for creative people who could see connexions between disparate things and recognise patterns. It's true that maths is all about recognising patterns as well and so the Enigmatists were also looking for math-whizzes form Oxbridge. Now cryptography is almost all brute force - persuading a massive computer to find prime factors of enormous numbers: no role for quirky cross-referencing there. Whatever her original training, I am owning Elizebeth Smith Friedman for STEM.

More women in science
If you like Fagone's style you might enjoy this essay about another extraordinary woman 'solving'  gunshot wounds in Philadelphia.
Posted by BobTheScientist at 07:22