Peak Oil is an ever-receding horizon. Since I first started to pay attention to geopolitics - probably around the Oil Crisis of 1973 - the End of Oil has been 25 years in the future. In 1973, climate change was a strictly for palaeontologists. For Joe Public the oil crisis was just about getting enough to drive to-and-fro The Mall and heating the house so he could wear a t-shirt watching telly at mid-winter. As more and more countries ran out of their own supply, all eyes were turned to The Gulf where the oil-wells seemed to be bottomless.  That would be the Persian Gulf.  Persia would be Iran. 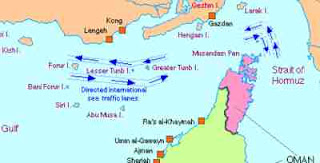 pic creds: Peter Jesella [bigger]
The oil producing states did think about a pipeline across the desert to the shores of the Mediterranean but a long long pipeline is effectively indefensible and political instability has been more or less continuous in the region since The West started to worry about the oil supply. Accordingly, oil from the Gulf is shipped out . . . through the Straits of Hormuz [map above] between Araby and Asia. In Geog 101, at school, we could identify the Straits of Hormuz and laughed at the lads who pointed at the Straits of Malacca on the other side of the Indian Ocean. These oil-tankers carry a LOT of inertia and are hard to stop in an emergency and need some notice even to alter direction.  We've seen a terrible accident happen when the Torrey Canyon, an early super-tanker couldn't be stopped in time and piled up on a reef SW of England.  To avoid that sort of thing, traffic is directed through the Straits so that ships pass Port-to-Port. Incommming ships keeping close to Iran, out-going ones heading nearer to centre-channel. It must be awkward at night in stormy weather not least because the entry requires a sharp turn from NNW to WSW.

Further west, the shipping is routed either side of a row of small islands: Farur Island, Lesser Tunb Island and Greater Tunb Island. which  would transliterate as Tonb-e Bozorg and Tonb-e Kuchak from the Farsi. Nobody is disputing the ownership of Farur, but the Tunbs, currently occupied by the Iranian army,  are claimed by the United Arab Emirates. Those conflicting claims are vested in alternative readings of history, because the islands have been affliated with / controlled by dynasties on both sides of the Persian Gulf. While Britain was occupied with the Napoleonic Wars, they were  throwing shapes in and around the Indian Ocean. In particular the East India Company [multiprev] wanted to ensure that traffic to and from Bombay [okay okay Mumbai] was unimpeded by pirates. At the least the term Pirate Coast got into general British official documents: anything that impacted the EIC's  monopoly of trade could be defined as piracy - which everyone, except the pirates, agreed was a Bad Thing. In 1809 they sent a squadron against the Qasami, whose power-base was on the Arabian mainland at Ras Al Khaimah. The Qasami fleet was destroyed but in the subsequent treaty the Qasami were reinstalled as the local rulers. The coast was rebranded as the Trucial Coast and the local sheikdoms and emirates became the Trucial States, under the 'protection' of the UK. 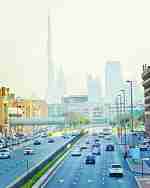 At home we have a picture of my father, i/c the Royal Navy amphibious warfare squadron, in spotless naval whites shaking hands with Zayed bin Sultan bin Zayed Al Nahyan aka the Sheik of Abu Dhabi  in 1966. Even that late in the days of empire, the Brits were exercising gunboat diplomacy with a 'goodwill visit' by the RN. Sheik Zayed was the principle driver and architect of the United Arab Emirates which came together in the wake of British withdrawal from the region. UAE initially (1971) consisted of  Dubai [they've done well for themselves if you like smog R and Nobó], Abu Dhabi, Sharjah, Ajman, Al Quwain and Fujairah but Ras Al Khaimah joined the party the following year in 1972.

Two days before the handover from the British, The Shah of Iran ordered a preemptive strike against the Tunbs on 30 November 1971 and the Iranians have been in occupation ever since. Their position is that the Tunbs have a) always been part of Persia b) that the Qasami occupiers were Persian citizens and c) Ras Al Khaimah wasn't a state and only states could claim sovereignty over some other place. UEA says the opposite and international lawyers, instructed by both parties, are out on the golf course thinking up cunning arguments. [slightly incoherent summary].  It's all not a million miles from a similar spat between Qatar and Bahrain about a reef. Similar too the dispute between Singapore and Malaysia over the pimple called Pedra Blanca.