Christmas 2021 we had rather too much water. The drain topped out and would have washed out the lane, were it not for three pairs of fit and timely hands to unblock the drain and keep the water out of the roadway. Meanwhile at the other end of the property the wee river Aughnabriskey got above itself and under-cut the bank, tipping several trees into the torrent. We spent a few days salvaging what firewood we could. I also planted out a few dozen rooted willow [Salix spp.] whips: hoping that their developing root system would stablise the bank whence their much larger predecessors' root ball had been untimely ripped.

Christmas 2022 was positively balmy by comparison. The cold snap of early December passed through without dumping any snow and we returned to normal benign wet Westerlies whooshing in from the Gulf Stream. I've been trying to pace myself, on the outdoor front, since copping a 'Rona eight weeks ago.  If work needs doing, it's little & often. Went to bed at my normal time on New Year's Eve and sprang from bed at 0600 hrs, as usual. A while later Dau.I wandered in, wondering about nautical and astronomical twilight [prev] and how they might relate to, actual, sunrise. Turns out, at this time of year, the grey time between  Night  and 🌄 is more than 2 hours! - waiting for the sunrise is therefore akin to watching paint dry. But we could see stars in the heavens, so that boded well for visibility of sun-peep. 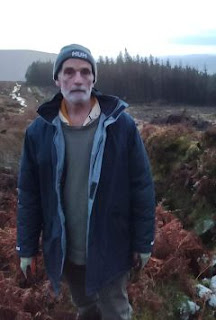 Even as we girded our lions <roooARRR> to set off up hill to see the dawn's early light there was a slash of rain on the windows; and we paused in mid-gumboot. But 10 minutes later, we left home regardless. eeee, it were lovely: watching the day break around us, as we nattered about databases, great bosses, the virtues of swimming, Excel, incompetent management, whether scones should have currants, and how crocked up we were by the covid. There was running water in the drain but none coming down from the sky  and by the time we'd reached the top of The Stumping Ground (previously The Sitka Forest before it was clear-felled) it was quite bright and we could see the remains of the earlier shower moving out across Wexford to the Irish Sea. If it looks a bit aura-like behind me [L], it must be the way I'm striking a pose. It's more than halfway to St Fursey's Altar, and I have a note-to-self on the kitchen calendar for St Fursey's Day in a fortnight. After a respectful pause, and a 'miner's view' to get some wind back we headed downhill, where Dau.I captured the year's first sunrise: 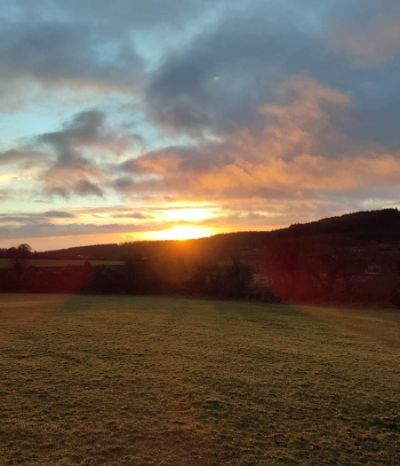 0845hrs: more or less in time for breakfast.

The weather stayed fine all morning. After lunch I looked at the Things To Do TTD list and carried ~30 willow [Salix spp.] trimmings, which had been soaking in a bucket for several months, down to the river.  I covered the roots in a feed-sack against cold shock, seized my Phineas Gage Memorial  iron spike, and strode off down-valley. Two minutes later, I came back to the house and told Team Baldur's Gate on the sofa that I was off on a real world quest and to come looking if I was not back by dark.
What could possibly go wrong?
Nothing!
But I did come within an ace of plunging full length in the river, when one foot disappeared down a ferny grike and the rest of me fell full-length on the very edge of dry land.

I'm glad that's done. The willow was at nothing sitting in a bucket in the garden. The whips I planted along the same riparian reach a year ago haven't grown in any obvious manner. But that's the way of small trees; it takes 3-4 years to get the infrastructure sorted [roots, water, nutrients, minerals] then whoomph: up they go. In this case, I'm indifferent to height; what's required is a tangled root system to act as a bulwark against the next 20-year flood. Of course, because climate change, the next 20-year flood is due next Wednesday!