So many hungry monkeys

I think one of the most important teachable skills in sciences is counting in orders or magnitude. That, coupled with knowing the appropriate level of accuracy and rounding an answer appropriately. Statements like this "The current population of Ireland is 5,073,347 as of Monday, December 19, 2022" is bollix, despite being top of the google heap in a search. For most purposes 5.1 million is plenty accurate coupled with 4.9 million in mid-2020 from the same source. Guesstimating the size of things can be a) fun and b) useful; as when Fermi famously estimated the power of the Trinity Test in 1945 with a handful of torn paper. Indeed, such solvable conundrums are commonly called Fermi Problems to this day. I have had occasion to despair when science students switch this skill off . . . if they were ever taught it.

In the hub-bub of a family zoom before Xmas, Gdau.I [just turned 11] asked me if I thought there were enough bananas to feed all the monkeys in the world. Yo! the apple falleth not far from the tree: Dau.II, her auntie, asked a similar question at a similar age: "How many people make a proposal of marriage in/on the Eiffel Tower every day?" and we cranked out an answer to that one. The current problem is in two parts: how many 🐒🐒🐒s? and how many 🍌🍌🍌s? It would be just bonzer if there were enough to go round.

It is easier to obtain a dollar value for the trade in bananas than a tonnage. This appears to be $13,000,000,000. Neatly, the price per kilo imported to USA is  $1.5; giving 10 billion kg of bananas shipped from one place to another each year.  Cavendish bananas, as well as being an endangered species, account for the vast majority of this trade and weigh in at 5 to the kilo. Y?MV but I'd hazard that trade bananas account for between 10% and 50% of total ripe bananas.  Farmers in Honduras must eat some of their crop; and send some to their grown-up children slaving away in the city. 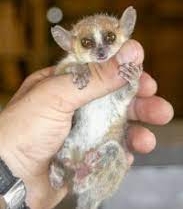 There are ~500 species of primate in total. Nobody knows; although lumpers vs splitters quite fiercely know different answers to the species count. Primates are the third most abundant Order of Mammals, after Rodents and Bats.
Apart from humans the most abundant primate is the gelada baboon Theropithecus gelada of which there are about 200,000 alive today. Nobody is claiming a spuriously accurate 211,394 count. If all primates were equally abundant, there would be 100 million non-human primates on the planet.

About half the primate species are Old [Cercopithecidae] and New [Platyrrhini] World "monkeys", so double the number of available bananas if you only care about monkeys.

Geladas are "bigger than a breadbox" at 10-16kg. Primates range is size from a mouse lemur (Microcebus berthae) [R with human hand for scale] weight 1oz = 30g to adult gorillas at 100kg [big sexual dimorphism in that species: males = 150kg, females 50kg].

The actual species abundance of primates is much less rosy than 100 million: numbers range from 200,000 to the several species which are teetering on the edge of extinction: effective abundance = zero!  Nobody has the skills, resources or patience to census all 500 species of Primate. But here's a table of 65 different species where those stats are available. The median value for head-count among those primate species is 1,000-2,000. So maybe

So there are plenty enough bananas to go round: at least a banana a day. That's just an appetizer for a gorilla but a daunting prospect  - 6x its body weight - to a mouse lemur.