Brownian motion is what you see down a microscope observing pollen-grains suspended in water  - the pollen doesn't stay still but appear to jink about the field of view in a random fashion. Crazy Russian Hacker shows that the speed of particle movement is dependent on the temperature of the water. In 1905, the 26 y.o. Einstein showed that the phenomenon was due to water molecules slamming into the larger particle fast enough to shift it. 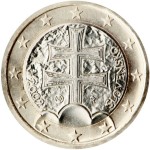 Dau.II and I were driving back from Tramore a few days ago and fell to talking about random movements of individual € coins. This was triggered by needing €2 for the Waterford Toll Bridge and the navigator idly rootling through the car's toll, parking and trolley-lock coin bag. Which country has "Lëitzbuerg" and which "LIETUVA" and which a double cross [see L] on the reverse of their coins?  The chances are that all those questions are "from foreign" to you, so you can be expected not to know the answers. But here's another task for which we predicted a massive fail: draw from memory the reverse of the 10c coin from your own country. TIL that drawing coins from memory is a trope in psychological research.

After musing on how interesting it would be to track a single coin from the mint to being irretrievably lost over the rail of a cross-channel ferry the next question was "What is the probability that such a coin would pass through my hands twice?".  She's asked such questions before and her nibling has taken up cudgels more recently.

The answer to this question is materially affected by whether the time-frame for the experiment includes The Before Times when people used cash on the reg'lar; rather than post-pandemic when use of <arrrgh fomite> cash fell off the bottom of the chart. But the answer is much more <?> affected by your position in society. Bob the Patriarch has become quite like Rishi Sunak in never having to pay ready money for anything - tapping and PINing away with plastic abandon. Dau.II otoh spent several years working retail in the catering trade and so handled a lot more cash than me.
How much more? Guessing between 10x and 1,000x more.
Not 100,000x more, though. If I jingled 5 coins in my pocket over a week, a cashier would handle 100,000 coins every day. The working day is 500 minutes long; €1 weighs 7.5g; 200 x 7.5 = 1.5kg a minute seems too much to credit. And a working day moving 100,000 x 7.5g = ¾tonne seems more like a navvy than a cheese-monger.

There are 7.5 x 10^9 [=billion] €1coins in circulation, presumably mostly within the EU which has 450 million ppl on board over the 27 member states. That's about 17 €1 coins each. I've defo got more than my fair share because, in a desultory fashion, I've been filleting out interesting €1s for the last 20 years. Faves: Italy [DaVinci man] and Greece [owl].

Now assume that coins circulate randomly across the Eurozone and you handle 1,000 coins a day. What's the likelihood of seeing again a coin you marked earlier with a masonic Square and Compass in invisible ink? Each day you have a 1 in 7.5 million chance. Which is as near as dammit to winning the Irish Lotto. Those calcs only apply to your hot hand. Like the Lotto, somewhere in Europe someone will win the returning-bad-penny prize, pretty much every time the draw is made.

But actually the €1 coins do not circulate randomly, they stay close to home. Most of the coins in our car-stash are Irish, still . . . after 20 years of stirring and exchanging between Berlin and Ballycotton. It must be the same on smaller scales: on the edges of Europe [like Ballycotton] it seems likely that the same coins tend to stay local. As a thought experiment, let's imagine a pub . . .

The Simplicity Arms only sells pints, they cost €4. Whoever opens up the bar, goes to the bank for a float of 200 x €1 and 200 x €2 coins. Boozers rock up singly or in groups and start buying. Aileen orders a pint, proffers a €5 note and gets €1 in change. Brian and Charlie arrive later and Aileen stands them a drink, paying €12 including the €1 she got earlier in change. Declan the bar-keep is handling that coin for the second time and the pre-theatre crowd hasn't appeared yet. That Euro is going to go back and forth all night never leaving the pub but being handled by several people, some for a second time. The city of Cork is like that pub. 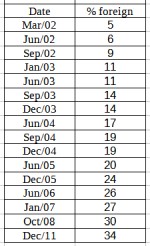 BloboPrev: When we joined the Euro-zone in January 2002, each country was invited to strike its own coins to its own design. Ireland struck 135 million €1s in 2002, compared to 300m in France and just 2,000 from Vatican City. I thought it would be interesting to get 200 €1 coins from the bank every quarter and tally up the provenance. Presumably on day 0 all the coins from Allied Irish Bank would have a harp on the obverse. But as German, Greek and French tourists piled in to buy pints of Guinness with their small change, the All-Irish flavour of the coinage would get diluted. Something could be learned from the circulation of Euro-people from taking snapshots of Euro-coins. I was super busy in 2002 pushing the frontiers of science - so that project never flew.

But it turns out that someone with more money than sense more time and dedication has addressed that interesting social-economic-geographical question. Seems that, over the first 10 Euro-years, the number of foreign coins circulating in France increased steadily from 5% near the beginning to 34% 10 years later.