New Year's Day, I was being weather-wise positive about Xmas 2022 compared to Xmas 2021. Which is kinda nuts because, while being spared Floods, in 2022 we were subjected to three separate storm-related power-cuts and a mighty lightning strike:  seemingly inside the house . . . there was the CRASH but also a smell of burning in the bedroom nearest the fuse-box . What is remarkable in hindsight is our capacity to make sense of sensory data in the context of prior experience.  I was so focused on dealing with the loss of electricity that all the symptoms were shoes-horned into the "electric system" shoe box. The "telephone system" because less urgent, was relegated to an after-thought paragraph. 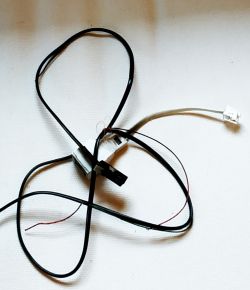 In due course, the phone company contacted us to say that they had fixed the phone problem on the 5th day of their five working day window of acceptable repair time. Not so, because neither their the direct-connect landline, nor the wire-free base-station walkie-phone were working. But, triggered by the contact, one of us went up to the middle bedroom to bring down the base-station. Which revealed a much more credible theory to integrate all the data [bang . . . inside house . . . smell of burning in bedroom] - as well as what ever took out the electricity; the copper phone line had internalized "300 million Volts and about 30,000 Amps". All that power had to go somewhere and it blew out 20cm of sheathing [R] round the phone line to the base-station, vaporizing some of the copper and some of the plastic in a big sooty mess. My high-school physics tells me that V.A = W. 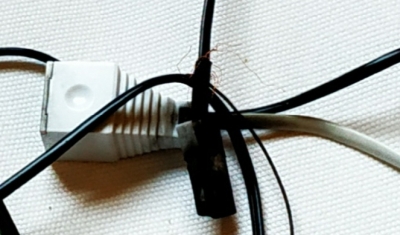 Note to self: only an amadán would contrive to take a photo of a sooty wire disaster on a white sofa cushion because it was the most convenient white background!

Collateral damage to table and wall: 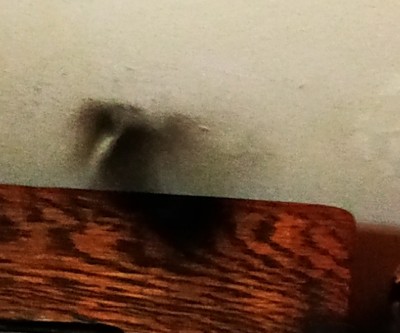 Posted by BobTheScientist at 07:12