I've written about St Martin before, so the post-title may lead you to expect something about religious relics - St Lucy's eyes or St Agatha's breasts or 4000 pieces of The True Cross.  But you'd be wrong - we're in medical history territory today because it's the 191st anniversary of Alexis St Martins' accident.

He does not get the press of Phineas Gage, who also survived a catastrophic accidental injury, but Alexis St Martin helped medical science in parallel but equally valuable ways.  Phineas Gage as any fule kno was working on the railroad all the live long day working on the railroad to pass the time away when he dropped an iron tamping iron too briskly into a hole containing blasting powder, which expoded and blew the 6kg iron bar through his left cheek and out the top of his head to land 25m meters behind him.  The story of how this accident contributed to our understanding of brain function and the seat of emotions is for another place and another time. 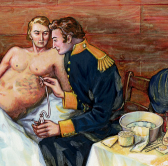 Because today, is Alexis' special day.  St Martin was a coureur de bois who in 1822 was accidentally gut-shot on Mackinac Island in what is now Michigan (joined the US in 1837).  An American army surgeon at the nearby army post, patched him up and expected him to die of septicemia over the next few days but the 20 yo St Martin was well 'ard and lived for another 58 years. The gunshot turned everything inside out, as you may imagine, but when everything settled down and healed up, the skin had bonded with the lining of the stomach to create a permanent gastric fistula exposing the stomach contents to the outside.  In particular it exposed the contents to the intrusive investigations of William Beaumont, the surgeon.  Beaumont persuaded the illiterate Québécois to sign on as his servant and for the next decade required him to chop wood and fetch water and "lie down on this table while I dangle this piece of mutton into your inside-outside while taking notes".

Posted by BobTheScientist at 08:52