My marmalade log book goes back to Jan 2003!  The basic recipe is from Mary McDermot via Delia Smith’s Winter Collection [the book, not the link whc defo didn't exist 20 years ago]. The key to the method is to separate two different chemical processes both involving heat a) boiling the oranges to release their pectin b) boiling the pip/pith-discarded pulp with 2x - 3x sugar to a roiling boil to drive off some water and make the sugar and the pectin stick together.  If your process conflates these two quite different reactions, you risk burning the sugar and/or having a very dark set to the marmalade.

The last ten years of my marmalade journey are record in The Blob. In 2020 we were super late because my mother died in peak marmalade season, but it was worth the wait because we shared the work with some other marmaficianados. In 2021 otoh, at peak lock-down II, I had to soldier on; all alone; with nobody to do even a cold-plate test. That generated a mighty marmalade surplus, so there was none made in 2022. But reserves were looking depleted in the bunker this winter and I was persuaded to get my apron on again. Shout out to Brendan Walsh, fruit whole-sale in Slieverue [X91 FR84] North Waterford who sold me a flat of Seville's for €26 cash. There were 102 Sevilles in the box and it transpires that the 2 possible pans for our process a) [above] take 26 Os and 4 pints of water. 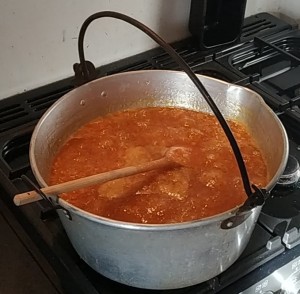 Starting at 07:00hrs, on two separate days in mid January I loaded up the Pectin Release Pans PRPs, and set them to boil-then-simmer for 3 hours. That's easy work. The hardship comes later when the piping hot fruit is split in half [ooo ooo aaa aaa AAAA*] and the pulp scooped from the peel. The glop is forced through a muslin or, better, a conical sieve; sugar is added at the rate of 1kg to 1 pint of glop; the minced peel is thrown thereto and process b) rolling boil is started [see L]. Because of the 3 hours of no intervention needed earlier this last cook takes only 15-20 minutes. It needs some attention, lest it boils over in a lethal sputtering lava-flow and/or it burns on the bottom of the jam-pan.

Jam cook-books say that you can predict whether the mix will set by dobbing some out on a cold plate and seeing if it stops running or crinkles at the edges if poked with a finger. But actually, we [re?]discovered this year, that you can tell by the sound of the boiling jam. When the mix comes initially to the boil, it is very fizzy and this is when overflow accidents are most likely to occur. Is that because, the gas dissolves in the water is being forced out of solution? Later, the sound turns to a deeper BLUP . . . BLUP and that's when the mix will pass the cold plate test and, in due course, set in the jar. 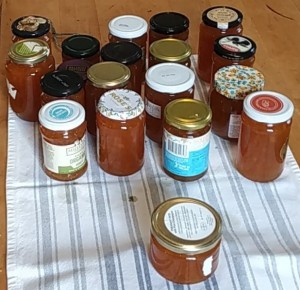 Set in the jar, is it. The picture [R] shows the fruits of our labour over the 3rd batch batch of [26 x minced peels; 2.8 kg glop; 4.0 kg sugar]. 18 miscellaneous-sized jars of 2023 Goldiloxian [not too bright; not too sweet; just right] marmalade. The jar in the fore-ground is designated for soon consumption because I didn't oven-sterilize enough jam-jars and we had to recruit a jar cold from the recycle box to take the last dribble from the jam-pan.

Did I say, Third Batch? I did! We now have a convenient 52 jars of vintage 2023 marmalade. Enough for +2 years at the rate we consume the stuff . . . assuming, erroneously, that we won't be giving any away. And we still have a baker's dozen of oranges still in the skin. They'll keep until we get the energy for another session in the marmalade foundry.

* Two monkeys in the bath. One goes "ooo ooo aaa aaa AAAA!". The other say "If it's too hot, mate, you can run some cold water in".