"Qu'ils mangent de la brioche" probably not said by Reine Marie-Antoinette on hearing that the peasants had no bread.

Today's deep dive is all about Ilmenite a titanium-rich mineral named for a deposit in the Ильменские горы Ilmensky Mountains in Central Russia. But priority for discovery probably goes to William Gregor as a black-sand placer deposit in Macannan in Cornwall.  Macannanite is another name for this mineral. Placer [pron. plasser] deposits will be familiar to Dan Hurd of Dan Hurd Prospecting groupies [prev] as they follow him  up the Fraser River in BC looking for gold. One of his clues for a rich source is to find heavy black hematite FeO3 sand while gold-panning: gold is also heavy and will get sorted with hematite by the action of the river. 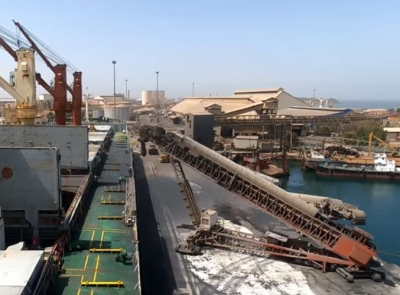 Like most minerals, Ilmenite was totally new to me until Joe Franta's [prev carrying wheat] bulk-carrier was sent to Dakar to pick a load of the material for transport to Norway. Why Norway? Because that is/was another source location for Ilmenite and they have the infrastructure to process the stuff there. Sunny Joe was a bit pissed off because Senegal Ilmenite is dusty and he was going to have to sweep up the thick coating of black residue from the decks a) after leaving Dakar b) after delivering in Norway. You can see the dust [above] on the froward = loaded part of the deck; as well as open hatch covers in the foreground and a nifty moveable conveyor-belt about to deliver More sand. Sunny Joe is happy because Ilmenite packs heavy [it's the density innit?] so they can only fill the holds part-full.

The black sand is strip-mined in the Senegal interior by Grande Côte Operations (GCO) to produce ilmenite and zircon. There is a follow-the-money connexion between GCO and Norway, while the umbrella body appears to be French megacorp Eramet.

Ilmenite is essentially hematite with some of the iron replaced by titanium: FeTiO3. In some deposits titanium is displaced by manganese Mn and magnesium Mg. But the company's geologists want deposits with as much titanium as possible because Ilmenite supplies about 50% of the world titanium dioxide TiO2, and that is a key material for some key products in late-stage capitalism: paint, sunscreen and food. TiO2 is a bright-white solid, insoluble in water, and capable of blocking UV radiation. About 9 million tonnes of it enters the supply chain each year. In the food industry it's known as E171 and the EU no longer allows it in the food chain. You're good to go in the UK, though! One of the take back control benefits of Brexit is that you can still get sunscreen in your royal icing, soups, broths, sauces, salads, sandwich spreads, chewing gum.

Likewise,  there is no real alternative to TiO2 in paint, and EU regulations since 2021 require producers to carry a "may cause cancer" label. RAW paints from Nederland claims to supply TiO2-free paint - it is not clear what's in that stuff, though.

Now here's a problem: Dan Hurd, gold prospecting in British Columbia relies on the Spring flood-waters of the Fraser to sift the mineral deposits in the river bed and along the banks. Gold and black-sand sinks to the bottom of the maelstrom and lighter material gets swept away to the ocean. In Senegal, the case is altered. Near the town of Diogo, GCO has "A wet concentration plant where mineral sands, ordinary sand and water are separated" which being interpreted is that sand is scooped up from the earth; then water is whooshed over it to act as a proxy for the Fraser's glacial snow melt. The water is sourced locally and there is a direct Water Wars conflict of interest between Eramet megacorp and indigenous vegetable growers. The water table has slumped from 5m to 12m and farmers fear that water abstraction by the company will only make it worse. The company promised a local hospital, a new well, and youth training followed by jobs on the mine. Few of these promises have been met and the youth are drifting off to Dakar for an uncertain future as cab-drivers and at-will dockers. But at least we have paint!