Up the Broad Arrow

My pal Russ from Tidesntales was allowed out of the Déise on day release in New Ross. There must have been pressing business to stop in the most depressing town in Ireland. With the new Kennedy-Fitzgerald Bridge, you don't even need to pass through the town to get to somewhere brighter and more appealing. I know Russ was there because he tweeted a picture of a surveyor's broad arrow ⇱ on the edge of the quay: "Spotted this while out exploring New Ross #Wexford yesterday, it's on the town side of the old bridge. It seems to be a crows foot, or map makers benchmark, but any I've seen tend to be vertical against a wall, whereas this is lying flat on the quayside". We drove through Ross recently because I needed fresh yeast from the  Polski Sklep  [shout-out] on the far side of the bridge. It's only fair to state that the town is much brighter from some gable-end murals; and cleaning up and re-purposing the derelict site of the burned down Royal Hotel.

So what about OS Broad Arrows - are they all vertical? Is the one in New Ross unique in having an exhausted lie-down?? I am now pushed to show a third option: broad arrows on a bit of a slope. It is up on the hill behind us and found by Martina and Dec from Wexford. It is really hidden in plain site. I yomped up the hill immediately on getting the news but couldn't see it although, because of another extremely local distinctive petroglyph, I knew I was in the right spot.

Part of the visibility problem was that, like Russ, I was assuming the benchmark would be vertical and on the edge of the roadway. But it's not: it is on a canted rock that is part of the road bed. Here it is: 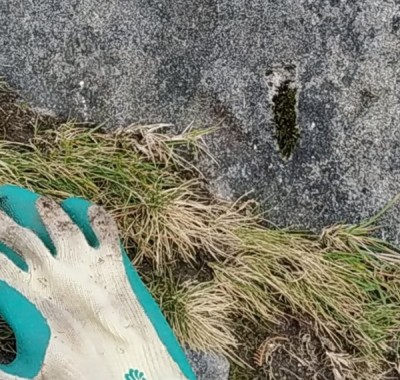 What? Where?? Answers below the fold. 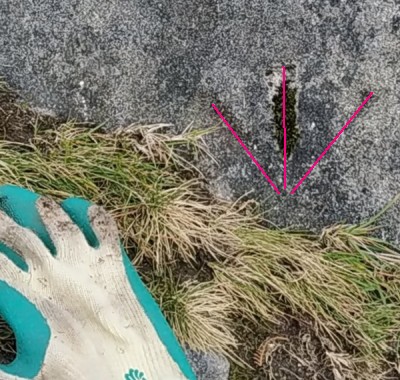