Anyplace where natural borders go wonk makes me wonder why: what combination of history, dynasty or inertia caused that political anomaly? I've been to Baarle NL/BE, for example, both actually and O'Blob: because who can resist an enclave in an exclave? Baarle is dynastic. Belgium has other exclave issues beside Baarle. Rangpur / Cooch-Behar shows similar entanglement unresolved by the partition of India in 1947. But shifts in the channel of the River Tumen has cut off part of China. While Steinstücken in Berlin was a more recent political outlier. The Soviets left exclave headaches in the CentAsiaStans when they dumped the SSR suffix and went independent. But that's all the concern of foreign Johnnies in distant places; surely nothing like that could hang on unresolved in modern times in . . . England. 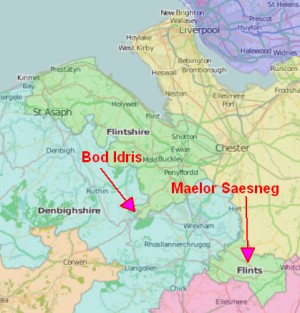 Ahem, and like Not So - at least up until the great 1974 rejigging of county borders which I discovered while stalking our ancestral demesne in Wales.  As it happens, historical Flintshire Sir y Fflint included the largest exclave in England and Wales Maelor Saenseg [Saxon Princeland] wedging itself uncomfortably between the English counties of Cheshire and Shropshire [map R]. In 1974 Flint and Denbigh were merged into Clwyd which was itself dismembered by the Local Government (Wales) Act 1994. to give this map.

But the searchable, zoomable Historic Counties Map is endlessly entertaining:

Closer to home there is a peculiar 120 hectare pene-exclave of Co Waterford 10km NW of Tallow: 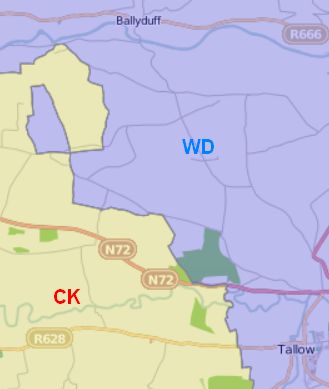 That makes matter-a-damn bit of difference except in determining GAA loyalties. But Further north a ragged intrusion of Co Monaghan in Co Fermanagh called the Drumully Polyp made things awkward after the partition of Ireland 100 years ago: That's famous enough to attract attention: in the troubles but surely more so post-Brexit 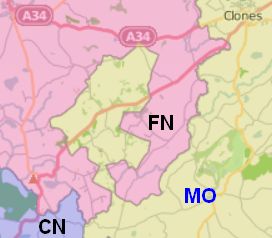 Finally there are 50 hectares of Limerick in suburban Charleville Co Cork: 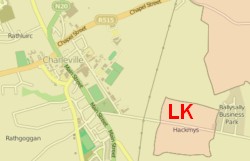