At the Birth of the Blob, I was much taken with googlewhacks and adjacent markers of unique contributions [goldiloxian, I'm l👁👁king at you]. Googlewhack was coined / devised by Gary Stock 20 years ago when the googleverse was much smaller. But the concept really took off under the ministrations of Britse comic Dave Gorman. He wrote a book about his journey: Dave Gorman's Googlewhack Adventure [2005].  The stand-up show is 100 mins on YT. Ever since, I've had Gorman pegged as a geeky but insightful commenter on the late stage capitalist human condition internet: and my sort of funny. Not that I've sent him me undies, or really paid him much attention these last 15 years.

But a month ago, Gorman bubbled to the surface of life's porridge as two quite separate bollupes. First on Taskmaster Season Six with Al Murray, Sarah Pascoe, Paul Chowdhry and Rob Beckett. We've been binge-watching Taskermaster episodes almost daily for a month+ in an attempt to behave like a normal family doing dinner in front of the TV. Taskmaster is reasonably amusing not least because nobody takes themselves too seriously [lest unmerciful slaggin' result, I guess].

Then a month ago I was 10 minutes early for Wexford Science Café and went down the stacks to browse a book and came away with two: 1) The Ash and the Beech [2007] by Richard Mabey and 2) Too Much Information or: Can Everyone Just Shut Up for a Moment, Some of Us Are Trying to Think [2014] by Dave Gorman . . . of which we treat. The age we live in is peculiar in similar ways that the Roman Empire in, say, 675CE was peculiar - decadent, self-indulgent, heedless of tomorrow for us 1%ers. Filtered through the internet: the insanity and disconnect cranks up a level into truly bizarre. 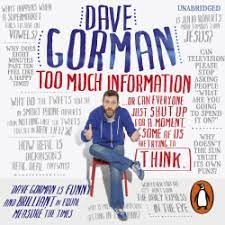 Gorman's book is not tightly editted because his publisher reckons that Gorman's stream-of-conscious laying out of his niggles and quirks will sell a lorra books as punters leave the venue of another packed stand-up show. 2014 was seeing chinks of light round the dark clouds of post-crash austerity and a little more disposable income sloshing through the economy. That being said, the book is built to look chunkier than it may deserve: big print, 1.5 line-spacing, generous margins.

In 2002, after the dot-com bust had cleared the internet air of some of the crazies, we were settling down to a quietly commercialized, still largely academic on-line world. Facebook, Twitter, Youtube were not even a malevolent gleam in a fell imp's eye. Amazon was still selling books on-line. Googlewhacks were . . . nice - wholesome, fun, quirky.

2022, the imp has slipped its nice mask and revealed a world of lazy-arsed journalism; cynical exploitation of people's generous nature; lies; political polarization and disrespect; overturning every sense of "value" except the monetary.

Gorman is sharp enough to skewer some of the pretensions of influenzers and others who are cashing in on the internet. Don't buy this book, but ask if you can borrow it from the local library? I returned the copy I borrowed last Tuesday.