The Youtube Algorithm delivered a rather Dude Bro video about hitch-hiking a ride on a DFDS container ship. It may have been because I went through a spell of binge-watching Chief Makoi a Pilipino Engineer vlogging his best life at sea. It all set me to thinking of the week I spent in  the Thames Estuary as a useless mouth an 18 y.o intern aboard a Trinity House service vessel operating out of Harwich. I'd left school the previous Summer and was still unconvinced that I should go to college so . . . gap year - before youngsters started to employ gap-year coaches to make their CV shine. I threw out an off-hand remark about running away to sea and bish-bosh-bash I was sent off to St Margaret's Bay in Kent to spend a night with Philip Walker, an old beau of my mother. In hindsight, this chap was vetting me to see if he'd totally lose face if he recommended me to his ex-colleagues at Trinity House(*) the corporation responsible for all the lighthouses, lightships, buoys, beacons and other navigational aids round England and Wales. I learnt how to make a vinaigrette that night, so the venture wasn't a total bust.

I must have passed mustard because shortly thereafter I was requested and required to report to THV Siren at 0800hrs on a Monday morning. Nobody knew what to do with me. I was only going to be there a wet week so it wasn't worth training me to a job of work. I'd be a liability sent down to the working deck to haul ropes and and diesel pipes. I spend two solid days in the chartroom behind the bridge cutting out updates to the chart catalogs and pasting over the old data. This was a boring chore for the three navigating officers; so there was an infinite backlog of fiches to be cut out and stuck into the correct place. If we approached a buoy to service it, I'd hear the commotion drift forward to look out over the foredeck at the activity and try to keep out of the way of actual crew who might be supervising the work. If I wasn't looking out at the horizon I was feeling decidedly queasy and so felt miserable pretty much the whole time. 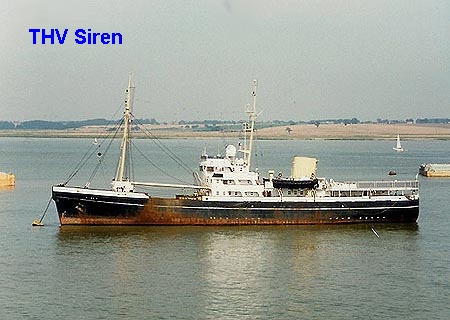 In the week, we only spent one night at sea. The lads would try to get the ship back alongside shortly after 17:00hrs so that almost everyone could go home and sleep in their own beds ashore. It was pointed out that the officers mess had a larder with bread, cheese, pickles, UHT milk and fixing for mugs of tea or cocoa. And that's what I dined and breakfasted on in the nearly empty ship. We had the one night at sea because the crew had been servicing buoys and lightships at the far end of the territory and it wasn't worth the fuel and time to get back to port late and leave early the next morning. I retired to my bunk and fell into a nightmarish fitful sleep as we bucketed about hove-to in the North Sea.

When I got up for 'work' the next morning all the sailor civil servants on the bridge were looking unaccountably energized having been the first on scene after a collision between two freighters in the fairway. My first thought was "ye baastids; the most exciting thing that's happened to the ship in a decade and you let me sleep through it?" but this was sharpish replaced with "fair enough, I wouldn't have been any help". I have a vague memory of the superstructure of one of the ships poking out above the waves but that might have been wholly made up in my head. If anybody had died, I reckon I would have noted it; but then again with my blunted affect, maybe not.

I do remember the skipper postponing the morning's plan-of-work and going on a jaunt up river to return a lifeboat to one of the ships involved in the rescue. The lifeboat had been abandoned in the darkness after the rescued crew had been taken off it. There was some jolly talk on the Siren's bridge about salvage rights and the value of one lifeboat, hardly used. But the skipper didn't hang about in Docklands: we unloaded the lifeboat with the forward derrick and turned round to carry on working the buoys out at sea.  A couple of days later, I left my life on the ocean wave and went to work as a hospital porter.

By coincidence, that year saw the publication of the Convention on the International Regulations for Preventing Collisions at Sea, 1972 (COLREGs). This superseded the 1960 regulations and was notable for implementing mandatory traffic separation schemes in busy maritime regions including the Thames Estuary and the Straights of Dover. Colregs does stop all the near misses that continue to happen because of the interface between navigational tech, navigators and normal accidents.

* Formally: The Master, Wardens and Assistants of the Guild Fraternity or Brotherhood of the most glorious and undivided Trinity and of St Clement in the Parish of Deptford Strond in the County of Kent!
Within a year I was enrolled at The Provost, Fellows, Foundation Scholars and the other members of Board, of the College of the Holy and Undivided Trinity of Queen Elizabeth near Dublin aka TCD.