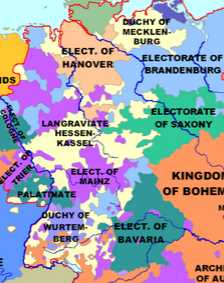 Eeee, but we do love an enclave: a little hold-out surrounded by a larger political entity OR we love an exclave: a pioneer in hostile territory.  They are often reciprocal, depending on your political point-of-view; but not always. The four-colour map theorem, which was proved by Appel and Haken in 1976, is pushed to its limits by the punctilio of medieval princes who insisted that a particular outlying field, church or hamlet was their property. These ancient asserted boundaries got locked into the borders of modern countries as kings, princes, electors and the maharajahs were put out to grass or up against a wall to make room for modern nation states.  I once spent an enjoyable afternoon fossicking around Baarle, and have given you an e-scoot round Berlin exclaves but I'm keeping Büsingen in reserve.  [R The colour-coded who-owns-what in Germany about 1800 CE] Brandenburg in pale blue is splashed out South and West from the heartland of Prussia.  It took two world wars to knock these fragments into a single Über-state and I don't think anyone is richer for the loss of interesting diversity except bankers.

This month, the governments of India and Bangladesh have finally agreed to some territorial exchange to sort out a clatter of exclave/enclaves in Cooch Behar where they are known as chhits.  It's been a long drawn out story since the Raj was separated in two by fiat of Louis Mountbatten the last Viceroy of British India. He announced the fact of partition on 3rd June 1947, at the same time announcing that Independence would be achieved a mere 10 weeks (!!) later at midnight on 14th /15th August.  The details were worked out by a Boundary Commission of five men chaired by Sir Cyril Radcliffe, but the hard decisions were all made by Radcliffe. When you reflect on the amount of time and money the Irish government has spent on commissions and tribunals to clear up its scandals, you might wish for the bloody, bold and resolute decision making of Radcliffe's team. Bloody is one of the operative words because when you draw lines across the map to achieve a utilitarian majority-rule ideal, there will be some actual people on the wrong side of the line. The fairness of Radcliffe's decisions is shown by the numerical equality of 'displaced persons' - 7,226,600 extra Muslims in Pakistan and 7,295,870 extra Sikhs and Hindus in India according to the 1951 census figures. That's about 3.5% of the total population in the sub-continent at the time. As seen in the film Gandhi and this mini-documentary, anywhere between 200,000 and 1 million people didn't make it far enough to become displaced but were murdered along the way. 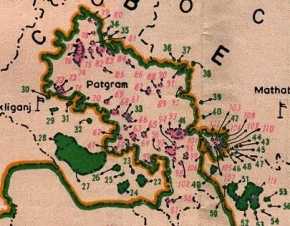 The Boundary Commission devoted most of their severely limited time sorting out the densely populated Bengal and Punjab but when the dust settled the border between West Bengal [India] and East Pakistan was, shall we say, still leaky.  Rangpur was assigned to Pakistan while the district Cooch Behar joined India a couple of years later.  These two political entities were nevertheless hopelessly entangled [L map of part of the problem] the identifying numbers of the enclaves are far larger on the map than some the enclaves themselves. Holdings had, according to legend, been used as stakes in a long series of card/chess games between the Maharaja of Cooch Bihar and the Faujdar of Rangpur.  As in Baarle, there are enclaves within enclaves, but Cooch Behar has the only third-order enclave in the world: a bit of India in a bit of Bangladesh in a bit of India in Bangladesh.  This fragment is only 0.7 ha - about the size of a soccer field. But it is by no means the smallest enclave at issue; this is Natatoka a sovereign part of India about 20m x 50m in size. These are clearly trifles, but the largest exclave is 25 sq.km in extent and home to 20,000 Bangladeshis who cannot get access to electricity.

The absurdity and expense of these anomalies was recognised immediately and the Prime Ministers of the two nascent states had agreed by 1958 to tidy things up. But in democratic states such things cannot be decided by diktat and the problem started to inch its way through legal treacle to the Indian Supreme Court.  Matters were just about decided when the 1971 Pakistani civil war broke out which bloodily split that nation in two and negotiations had to start again with the government of Bangladesh. The two biggest respective enclaves were joined to the 'mainland' in 1974 by agreed corridors.  Actually, the Indian side of this bargain wasn't fulfilled until 2011 because constitutional lawyers needed to feed their families for a generation. The result of a bilateral agreement signed on 6th June 2015 is that India cedes 7,000 ha [70sq.km] to Bangladesh and receives nearly 3,000 ha in exchange.  You'd need to be a lawyer to be sure that this will sort out where each flag will fly.  The people who own the land are to be given the choice of what passport they wish to hold.  I hope it all works out without a massacre or two.
Posted by BobTheScientist at 07:15