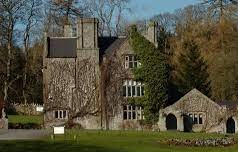 When I left England for college in Dublin in 1973, my Dad let me hitch a ride on a business trip to Liverpool. Because he was launching the cadet branch of his dynasty we detoured into the wilds of NorthEast Wales to visit The Ancestral Home [R "Bod Idris yn Yâl"]. But wait, my more assiduous reg'lar readers cry, are not your people horse-riding people from The Big House in King's County?  And the answer is: Yes that is true; but where did they come from? They weren't, after all, found under a cabbage stalk near the Little Brosna River.  My parents had apparently last visited The Welsh Seat 23 years earlier detouring, after getting married in London, on the way to their honeymoon in Scotland. He may have written to tell the current owners that we were coming or maybe not; my father had a certain sense of entitlement about descending on Big House people unannounced. Whatevs, we were given a glass of sherry and a brief tour of the house and garden before haring off for dinner and bed in Liverpool. The one thing I remember about the visit was being told that the Flint / Denbigh county border went through the front door of the house.

I have a grá for quirky cartography. But this 'fact' is hard to verify because the Brits did a complete rehash of their county borrrders in 1974 when the Local Government Act (1972) was implemented. The "historic counties" of Wales were Anglesey; Brecknock; Caernarfon; Cardigan; Carmarthen; Denbigh; Flint; Glamorgan; Merioneth; Monmouth; Montgomery; Pembroke; and Radnor. Which is evocative but slightly cray-cray for the modern world: while these 13 administrative districts are all more-or-less the same size they are wildly different in populations from Radnor with 25,000 people to Glamorgan weighing in at 1,250,000 or 50x larger. Glamorgan contained all the coal measures, the docks, the iron-works, and the Principality's two largest cities Cardiff, Swansea . . . so jobs and the people to work them. 1974 replaced all the borderlines: splitting Glamorgan into 3 and chop&dicing the others into eight new units: Clwyd; Dyfed; Gwent; Gwynedd; Mid Glamorgan; South Glamorgan; West Glamorgan; Powys. As a kid I had a wooden jigsaw where each piece was a county in England & Wales. I knew those counties but I have only a hazy idea where Clwyd or Dyfed march.  The poor Welsh were subject to another administrative rehash in 1994 replacing the 8 1974 counties with 11 slightly different units.

But if the story about the border passing through the front hall of Bod Idris is not precisely true, it is close enough to make no differ. Getting the scope on the present day house, which we visited in 1973, is easy: It is a wedding venue and easily located on Google Maps satellite view: 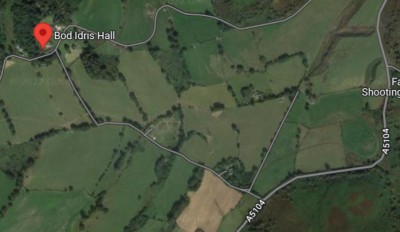 The A5104 is the main road between Chester and Corwen and Bod Idris is half way crow-flies between Wrexham and Ruthin. It's okay if you've never heard of any of these comparatively small towns. Nicely someone has digitized the "historic" [i.e. pre 1974] county boundaries and colour coded the blocks: 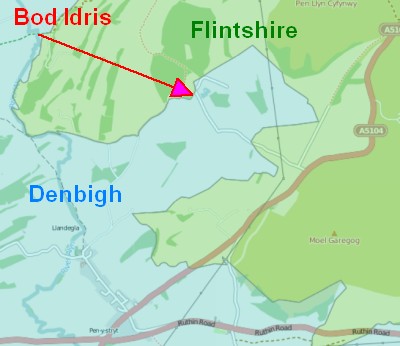 I'm glad I sorted that out for us all!