Get yer moobs out, Chris

When I were a nipper, it was rare to see a fat child. My mother's, not uncompassionate, assessment was "It's just his glands, poor thing". She didn't have the scientific language but her meaning was that obesity was physiological condition cause by an unfortunate defect: like having diabetes, cancer or a cleft palate. Glands are the pink bits inside us which produce hormones - small chemicals which are secreted into the blood-stream to act elsewhere in the body. You know the names of some: adrenalin, insulin, test♂sterone, estradi♀l. But I bet you can't spell all 60+ known non-steroid hormones [crib], let alone have an inkling of what is each one's purpose. CLOG hormones which have a role in this story: cholecystokinin, leptin, orexin and ghrelin, .

Now we have an epidemic of obesity and nobody really knows why. It's particularly distressing to see over-weight kids because their life-time health prognosis makes grim reading and because blaming them for their condition seems like punching down. Yes, yes, there's a punching duvet joke in there as you flush the poor beggar's head down the t'ilets at school. And if we want to make a stand, or spread the word, on childhood obesity, who better to front it than Chris and Xand van Tulleken who kid's TV teleprog Operation Ouch! - much gawped by my Gdaus?  Earlier this year they published a 7½ part podcast A Thorough Examination which explores the relationship between nature [genetics] and nurture [eclairs] w.r.t.obesity in 30 minute chunks 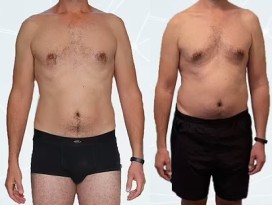 It's not the results of a double-blind case-controlled scientific study but the series hinges on an interesting anecdatum: Chris and Xand are identical twins but in their early 30s they started to diverge radically when they stood on identical side-by-side bathroom scales. Part of the of the experiment Chris O'Thin [RL] elected to eat an 80% junk-food diet [uo from 20%] for just a month which made his shorts longer [RR] put a lot of sag on his moobs and more grip to his love-handles. He'll be able to work-out these lard-kilos off in a similar amount of time because there is a certain inertia in human physiology: at age 42 it takes a big and/or continuous shove to disturb the set-points of our systems.

At age 48, I went paragliding, one of the mildly embarrassing outfalls from that weekend was being forced to stand on a scales to assign a canopy of correct [= sufficient] dimensions. I knew my weight had been stable 73kg for my 18-30 years and guessed it might be up 6-7kg. I actually clocked in at 86kg! and was mildly fat-shamed "someone's been telling porkies" by the instructor. But I shed all those extra kilos in 6 weeks = 800km trudging down the Camino two years later. Even living my best sofa in retirement, I'm still more or less at my 18-30 weight. So your/my current weight is not set in butter. 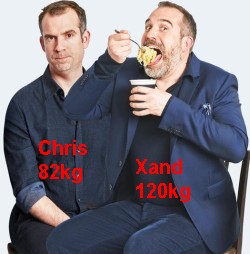 Mais revenons nous a nos Tullekens. 10 years ago, Xand went to New York for work at a time of relationship upheaval - including an unexpected offspring. His digs were above a friendly bodega, he was working weird doctory hours and he was tired and lonely. So his kitchen trash started to fill with take-away cartons and chip-packets and pizza trays. And he grew and outgrew his trousers. Chris, seven minutes older, was back in London, also doctoring, but getting married, keeping exercised and having a couple of kids with whom to play garden soccer. Plus, as health-care front-liners they both copped a 'Rona but Xand was much sicker - atrial fibrillation; A&E; long-covid.

Every time the brothers met, they'd go out for a meal, Xand would have two starters and extra fries and Chris would (under the guise of care) fat-shame his brother . . . who would double-down on the assault on his tum sense of self. One of the positive outcomes of their podcast journey was the realisation that Chris's gobby caring script was not helping the problem.

But the chow mein message of the series is everyone's beef with UPF = ultra-processed food 🍔🍕🍟. This is the stuff which we buy from the food aisles of supermarkets or through deliveroo which is a) triple-packaged and b) contains ingredients not normally found in the domestic battery de cuisine. Ground cumin is processed but frozen Indian onion bhaji and spinach samosa is UPF. even if mmmmm so Good. And get this: putting ORGANIC  in large letters on the front of the packet may be green-washing a pharmacopaeia of surfactants, antioxidants, emulsifiers, stablizers, sugar and salt in the table of contents.

In 1980 regular "raw?" potatoes, broccoli, milk and mince comprised 58% of the calories in average British diet by 2020 57% of the calories came from UPF. Not forgetting that there is a middle ground of processed food which includes ground cumin, wheat flour, rolled oats, minced pork.  This change in the national diet has been tracked by a 3-fold increase in folks "living with obesity". No responsible person (ie excluding headline writers) is saying X is caused by Y; but you draw your own conclusions when it comes from catering for your kids. We all love crisps and fried dumplings - they are designed by food engineers - making us love the product is their job. But for the kids maybe try just say No! ?

So here's your quiz.  Identify the products here without the bright picture on the package: