On this day in 1831, King Leopold I was installed as King of The Belgians, since when 21st July has been celebrated as their National Day.  I'll leave that in English because Belgians speak Vlaams (60%) and/or Français (40%) and German (0.7%) and if I write the Flemish form first I may offend the Francophones and v.v.  Presumably, today there is a holiday in all Belgium not just in the bit South of the Netherlands.  (Belgium shed its colonial empire in 1960, when the Belgian Congo became the Republic of the Congo, now called Democratic Republic of the Congo.) 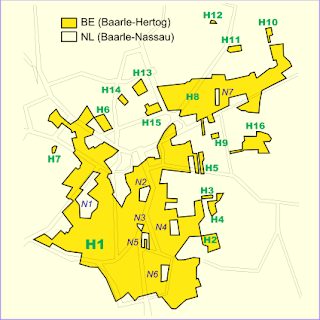 You can see from the map that there are 7 NL exclaves within the BE exclaves.  The smallest fragments of each country are about a quarter hectare in extent - say 50m x 50m if they were square, which of course they are not.  So you might well get confused about where you are.  When I visited in 1979, the intercalated towns had mandated such subtle way-finders as having house numbers on authorised plaques in the tricolor colours of the correct country.  The convention being that the front door of the house would dictate where the owners should pay their taxes.  For the handful of cases where the border bisected the door, the occupants could choose.  From Google images, it is clear that the authorities have since decided to deface their streetscape with huge white crosses in the roadways marking the border and large tiles marked NL or B at intervals. Bureaucrats must feel they have to make such things obvious because they can't spell nuance, even though it is the same word in English, French and Flemish.

There are advantages.  Belgians are more secular than their Calvinist Northern neighbours and so allowed shops to open on Sundays.  It would be invidious to prevent NL shops in Baarle-Nassau trading when their rivals along the street could do so; so they obtained a dispensation.  I also understand that there is a brisk trade in fireworks which are much more tightly regulated in NL than in Belgium.  Otherwise, with the Euro having replaced Francs and Guilders, and the EU homogenising all our lives, I guess there aren't many remaining differences.

Not to be outdone, there is a single Dutch exclave South of the border: just under 3 hectares of farmland called Vossenberg (Fox mountain).  I've marked it in a foxy brown below because I don't trust you to figure it out for yourself (and I'm applying for a job with the Gemeente Baarle-Nassau): 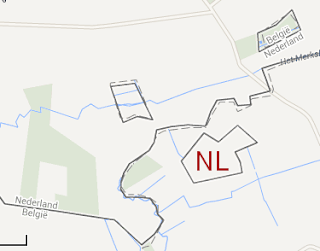 Stop Press.  The Belgian King Albert II has just abdicated in favour of his son King Philippe.  All together now, let's sing the  Brabançonne.


Posted by BobTheScientist at 10:38