Let's drink to World Peace. That's a big ask, I guess; so could we just park ethnic cleansing? If young expendable boys must beat their chests and shake spears at each other, I suppose we could sanction that in some form . . . calling it GAA, for instance. It is not okay that ordinary farmers and shop-keepers should be taken away to the forest to be killed because they live somewhere nice but wear the wrong colour hat, bend the wrong knee or speak the wrong dialect. We had about 30 years of that in Ireland since I was born and that's 1,560 weeks too much. One way to mitigate this sort of ugliness it to draw borders which maximize the 'ethnic purity' on either side of the dotted line. In 1947, Cyril Radcliffe's Border Commission took 10 weeks to draw lines on the map to separate India from Pakistan. That only left 15 million folks on the wrong side of that essentially religious divide . . . and only 2 million dead from the tidying up pogroms. 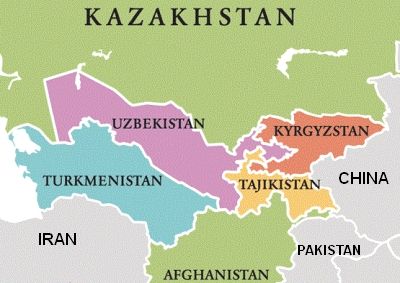 The border tangle in the Central Asian *Stans looks like the kind of Gerrymandering you get when political parties get to decide where to draw administrative boundaries and fail to resist the temptation to be partisan [bin thar before]. As an aside, note that Kazakhstan is by far the biggest, richest and least densely populated of all the former SSRs.

The take home from this is not that Uzbeks are partial to diaspora: there are just more of them. There are almost twice as many Tajiks in Uzbekistan as there are Uzbeks in Tajikistan. Compare the per capita income in the previous table to work out why that might b€€€€ so. The officially atheistic Marxist paradise USSR affected to believe that religion was irrelevant but most of the inhabitants in the Stans are [Sunni-ish] Muslims. Whatevs, in contrast to Ireland, that is not the root of many conflicts in the region. The Soviets did their best to curl the tails of Tajikistan, Uzbekistan and Kyrgystan to corral their citizens by language and culture.

Like with Lithuania, this has resulted in some peculiar wriggles and blobs on the map: 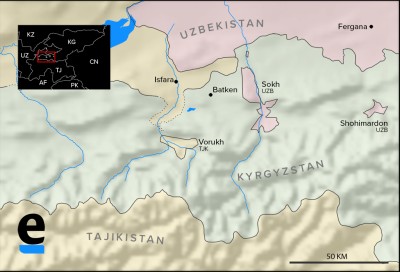 There are exclaves of all flavours. Tajik islands in the sea of Kyrgyzstan like Vorukh shown centre in the map above. But also Sokh = So'x which, bizarrely, is ethnically Tajik, politically Uzbek and surrounded by Kyrgyz. If you want an old style adventure try flying into So'x on a 70 y.o. crop-duster Antonov 2 biplane with geoblogger Bald&Bankrupt [1]. Politiblogger James Ker-Linday explains the how fist fights turned into Kyrgyzstan-Tajikistan border fire-fights last Spring.
tl;dr there's a lot of arid hills in *Stan; flat lands in the river valleys are premium real estate which is becoming increasingly valuable as environmental degradation surges ahead on a wave of extractive and exploitative "economic growth". I touched on this a few years ago writing about the Aral Sea getting sucked dry for cotton and melons.

1 Ben Rich aka Bald & Bankrupt was detained at the Baikonur Cosmodrome in Kazakhstan at the beginning of May for trespassing near the Russian space launch site.