Unless you've been living under an Internet stone since June 2013, you will be aware of the AITA sub-reddit and/or AITA twitter feed: "A catharsis for the frustrated moral philosopher in all of us, and a place to finally find out if you were wrong in an argument that's been bothering you". 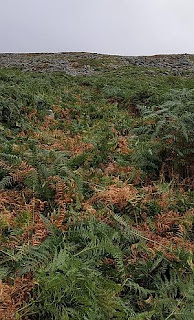 Soooo, I was up the hill again with the neighbours, cutting the [dying] ferns Pteridium aquilinum to improve the quality of grazing on our commonage. I was up there on my ownio in mid-August mapping the cuttable territory. Since then, I have put in five days of physical scything labour with a good bit of phatic chit-chat on the side. As an in-blow with the wrong accent and lily-white hands, it's important to show that, while I cannot harrow a field or shear a sheep, I can keep up my end as a labourer.  My scythe is by far the best tool for the job . . . so long as the rocks and woody heather [Erica cinerea Bell Heather Fraoch Cloigíneach; Erica tetralix Cross-leaved Heath Fraoch Naoscaí; Calluna vulgaris Ling Fraoch Mór] are not too plentiful. The Lads turn up with a variety of slashers and bill-hooks which are real heavy-duty over-kill for the task . . . except that those tools can take numerous dings from hidden stones. A boulder as big as a suitcase can be completely invisible behind 15cm of bracken.

You may not be able to see any difference [L] between the 4m wide strip I've laid low and the untouched still standing ferns on either side. This is because a) cut ferns don't lie flat like grass or oats b) it's late and the bracken is turning brown anyway; making the whole exercise a bit of a futility closet. Should be done in June, while the growing stems are still depleting the underground reserves and before the plant starts replenishing supplies through photosynthesis. And avoid bracken in July when the spores are present as brown scabs on the underside of the leaves! Those spores are carcinogenic.

Getting paid by the day means breaks in the work for re-fuelling with tea and sangers and farmerly chat about the GAA, the weather and prices at the mart. Some of this is more interesting, some less; and I now have a better idea of who married whom before I was born and how that attached certain fields to still living descendants.  During one lull in the conversation, the community wag offered "I guess this is where we gossip about the neighbours . . . ooops, no, they're all here".

The talk became animated when it turned to the price of agri-Diesel. This product retails for about half the price of regular diesel and is dyed green to stop farmers filling up the Mercs with the stuff. As the world knows, the price of oil is creeping up [again] and farmers get through a lot of diesel. They are also notorious for driving a hard bargain to determine what the market will bear for hoggets and hay-bales.

Farmer calls regular diesel supplier and is told that the price has gone up to 80c/lt. Orders a load but then >!thought!< calls rival supplier down the road and is quoted 76c/lt. Goes back to original supplier, retails this information and threatens to cancel the order . . . boss comes on phone and says, rather than lose a valued customer, they will sell at 76c. Delivery fulfilled 0800hrs the following day. Farmer "Harrumph, what price loyalty, hey? Sure these oil-men are just codding us all." Listening to this, I wondered whether I should be asking for discounts like my neighbours.

But a restless night and some dreams later, I concluded that loyalty is a double-bed. If you believe that all your suppliers and servicers are out to gouge you to the extent you no longer trust them to be offering a fair-price then that leaves you in a rather uncomfortable bivvy-bag on Isolation Island. And if Jerry the Oil [who really pushed the tanker out when we were snow-benighted in March 2018] is forced to shave his margins to the bone, maybe he'll have to let go the really nice woman who answers the phone. Is that really what you want? Is 5% = €40 worth that much to you?