The title is a piss-take on Douglas "Up his chuff" Hofstadter's long and pretentious book Gödel, Escher Bach - an eternal golden bore braid [Bloboprev]. Kurt Gödel, Muhammed "Mr Algorithm" al-Khwarizmi and Kevin Bacon are the only people mentioned by name in Milo Beckman's book Math Without Numbers. Although "pythagorean" and "platonism" gives a cautious hat-tip to a couple of ancient Greeks. It must be a deliberate no-name levelling policy to use circumlocutions for other famous mathematicians:

And it's usually polite to cite your sources. Beckman includes a discussion of some infinities being bigger than other infinities similar to mine but I explicitly recognised that the idea is original to Georg Cantor not to me or Beckman. In the same chapter, Beckman joins a long list of people [incl Veritasium] who discuss Hilbert's Infinite Hotel Paradox. The thing is, it's easy to re-tell the story - heck, even I've had a go - but it's a different order of cleverness to have cast the problem in a way that can make it accessible to Joe Blowe and Jan Publiek.

Earlier on in the book, Beckman [and their illustrator M Erazo] show that one of two groups of things is obviously bigger than another. Changing up the picture beyond 3 or 5 {boxes, dots, apples} makes the illustration more visually appealing but lurries in a confounding variable because M's objects are all different sizes. Thus [starfish, halibut, digestive biscuit] has, because 300kg halibut, greater biomass than [crab, whelk, scallop, sea-urchin, augur-shell]. Been there before comparing "abundance" of Prochlorococcus and humanity.

The conceit of Math Without Numbers is explicitly stated inside the dust jacker "The only numbers in this book are the page numbers" but that is explicitly contradicted on p.124 with the statement "zero is a number". In fact numbers are mentioned on almost every page of the book but they are written out in english - seventeen - rather than roman - XVII - or japanese - 十匕 - or 'arabic' - 17. So that's a bit of old bollix. Why pick seventeen?

Wellll, because TIL that there are exactly 17 distinct types of 2-D repetitive wallpaper symmetry patterns with which a plane may be covered with no gaps. They right purty: 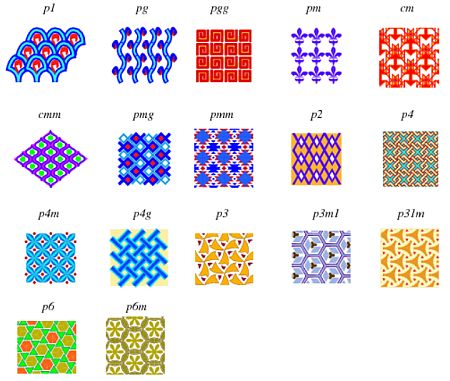 And that, in this our Universe, there are only 17 combos of mass and charge which are tolerable to make the fundamental particles from which everything else is constructed. They are far too small to be pretty but they have a certain orderliness: 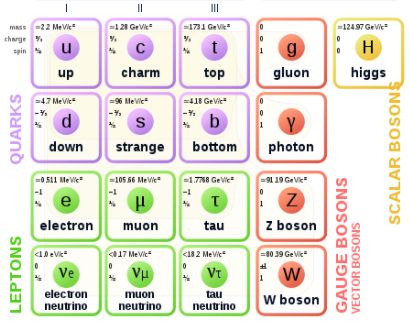 For all my snippy snark, this book has clearly made me think. Not worth buying a copy, but worth checking out of the library. But we'll give Milo a chance to convince you otherwise: