On 3rd September, my mother and grandmother had briefly got under the kitchen table in their home in Dover [as today R] after PM Neville Chamberlain announced that from 11am Britain was at war with Germany. After a few minutes, no death raining down from the skies, the dusted off their pinnies and continued to prepare Sunday lunch for the Patriarchy (Uncle John and Grampa) who were in a different part of the house reading newspapers. When we started to visit in the 1950s there was a patch of the ceiling paper of a slightly different design. Later on the house had sustained damage from a nearby explosion blowing in the window of the living room and sending a splinter of glass into my grandfather's eye blinding it. As kids we peered at his eyes discretely to work out which one was glass and which functional. The difference was harder to see than the damage to the ceiling.

Let us, on this day, pause to think about Larry Slattery of Littleton Co. Tipperary, whose plane crashed into the sea at Wilhelmshaven during the first raid over Germany carried out by the RAF on 4th September 1939. The raid, although commendably quick off the mark, was a disaster, half the planes got lost and returned their bomb-load to base, several Blenheims were shot down with most of their crews killed. Slattery the navigator/gunner was fished from the drink with a broken jaw and foot, patched up in Kriegsmarine hospital in Wesermunde and spent the rest of the war in Stalag Luft III POW camp. He thus acquired the distinction of being the longest held Allied prisoner of war. 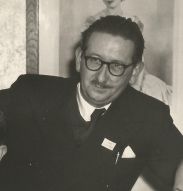 Slattery was an accomplished violinist and was a founder member, and leader, of a 70-strong camp orchestra whose concerts were important for maintaining morale and sanity among those men for whom the war was over. The instruments were largely supplied by the International Red Cross. Indicating that, at least on an implicit level, the IRC recognised that mental health was as important as, well, health. When he died in the 1970s, fellow RAF survivors of a musical turn endowed a scholarship fund in his name to funnel money to needy young musicians. POW camps were run in parallel by their German captors and by an internal structure headed by the senior Allied officer present. The best camps maintained discipline and morale by organising classes and entertainments with whatever talents that were available. Slattery became fluent in German, for example. Stalag Luft III was the site of two WWII escape dramas The Wooden Horse and The Great Escape, but the majority of the kriegies kept on keeping on until the end of the war.
Posted by BobTheScientist at 08:37