We've been living where we live for 25 years. Dau.I and Dau.II were tots when we moved in. They grew up outside: even micro-farms generate plenty of work and everyone must bear a hand. On fine days, they would walk up the lane to The Mountain Gate and beyond with their mother and have stories and a picnic lunch. The rocks on which they sat acquired names and associated rituals. At the Mountain Gate, a spruce plantation started to obscure the view to the East and the lane continued up between this dark green cliff and the slightly gentler grey-rocky slope heading West up the hill. On sunny Spring mornings it was chilly near the forest and I have been known to yomp across the heather further uphill in order to feel the sun on my back.  Other times we've scrambled across the rabbit-proof fence and plunged into the forest to check its gloomy heart. Tadpoles! Fungi!

The forest was thinned a good few years ago and it's been threatened to be clear-felled since at least 2017. This Summer Coillte, the state forest service which owns the forest, drove a new road in from the the far side where they were already harvesting trees. Clearly the writing was on the wall. Earlier this, the second week in, September we undertook to dog-sit for friends-and-neighbours on the other side of the valley. Taking the aged hound for walk up the hill behind their house, we looked back and saw: 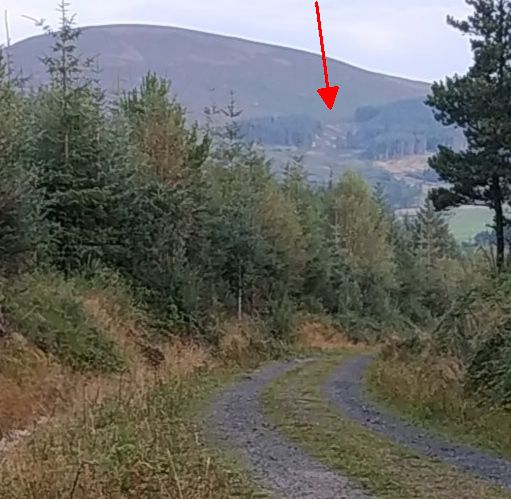 Aiieeee! Without us being more than subliminally aware, our forest had a huge bite taken from its heart and the stripped trunks of the trees laid in pale windrows up the slope. The following morning the horizontal part had more or less doubled in size [above].

That evening after I'd been over to feed the hound and put him inside for the night, I walked up the hill through the clouds to see what things looked like close up. 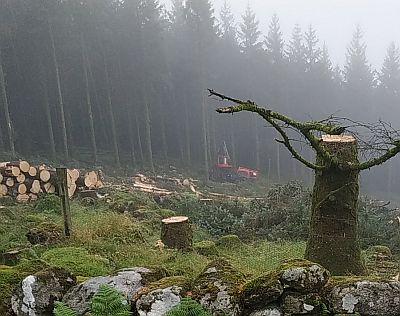 All it needs is a raven or two to sit on the branch to caw balefully about all things must pass.  At the forest edge you can see the forwarder; a big-wheeled off-road vehicle [stirring-music youtube] which cuts the living trees [closer to the ground that here near the fence], seizes the butt and passes the whole trunk through a mill which a) strips off all the side-branches and much of the bark b) cuts the core into lengths - either 2400mm = 8ft, 12ft or 16ft. The whole rig can swing around as it is brashing the trunk to leave logs of each length in heaps together for later collection. It's hard to credit this progress. Well into the 1950s lumberjacking was done by hand with a bushman saw and an axe both razor-sharp [source: Lumberjack by William Kurelek]. Now a single operator with a forwarder can fell and process mature trees at the rate of about one a minute. Here's a sort of before and after view through the mist: 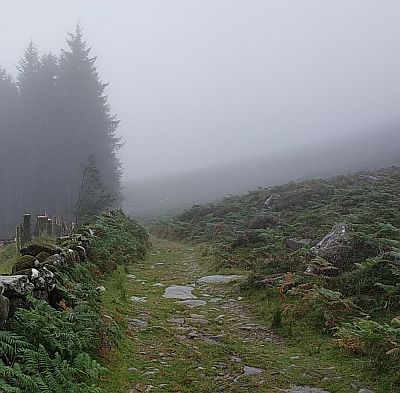 In August this year Gdau.I and Gdau.II went for a walk through the forest with The Boy for the first time. It was dark and mysterious and rather wonderful, as it had been for their aunties at the same age, 20 years ago. When the girls were there, the stumps in the left foreground were big trees contributing to a solid green wall. Those looming trees behind? They won't be there by the end of the month.