The Science of Cheese

🧀I'm having a great deal of fun reading A Cheesemonger's History of The British Isles by Ned Palmer as an eBook on my Borrowbox device. Ned Palmer consolidated his love of cheese by working for several years in Neal's Yard Dairy in London. He also developed formidable upper-body strength from turning heavy rounds of cheese to keep the cellar's treasures in peak condition and reducing the population of cheese mites Tyrophagus spp. [literally that is cheese-eater in Greek] to manageable proportions. In the course of his work hefting and selling cheese he got to know many of the artisanal cheese-makers who rediscovered and reinvented the lost arts of this cottage industry in the 1980s and 90s. The book's conceit is to pick one presently available cheese which seems to exemplify the techniques of a particular bygone era . . . and go visit the place where it is made. With luck, the cheese-makers will get some free labour out of their visitor but it's clear that some of the tasks cannot be done efficiently by a tyro tyrokomos τυροκόμος.There is a zen of cheese - good cheese is not to be bludgeoned and cheesemakers know when to step back and let the microbes do the talking. But when the the work of human hand is required, that hand must be practiced, committed and fast. 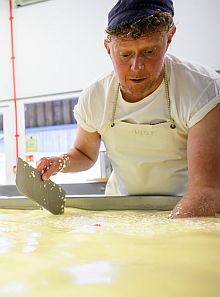 🧀Todd and Maugan Trethowen [R up to his elbows] started making their traditional Gorwydd Caerphilly in response to the demand for carefully made cheese towards the end of the last century.  It's no longer made in Wales because the logistics got too difficult in the remote valley where they started to revive a real cheese that was rather different from the plastic-wrapped blocks of "Caerphilly" sold by the tonne in Tesco. Like my late lamented friend Mario Fares and the options of PAML, Maugan Trethowen systematically altered all the parameters of their cheese-making process - e.g. heating successive batches of milk from 20°C to 50°C and carefully recording the outcomes. Gorwydd settled on 22°C as the optimum. Unless you do this, you may get good enough but you'll never get the best.

🧀Later on, in a discussion of witches and their effects on the neighbours' cheese, Palmer writes about curd which congealeth so it will rope like birdlime that you maie wind it on a stick . Ropey milk was part of my patter at The Institute when I was introducing the Lactic Acid Bacteria practicals in the Food and Fermentation Microbiology course. What the local witch-finder described above can be rendered in science-speak as the production of exopolysaccharides by Pediococcus spp. Pediococcus is also an LAB but fermenters definitely want to keep it out of the workplace for this reason. Scrupulous washing of hands is required in modern food production facilities but there is also an argument that the shelves, walls and ceiling of the cellar and, indeed, cheese-makers' hands are an important source of good bacteria which can fight off the black-hats more resolutely than bleach.

🧀As a final anecdote about trade secrets, open disclosure and The Art, I'll quote Joe Schneider, who makes unpasteurized Stichelton in the same region of the English Midlands where Stilton enjoys Protected Designation of Origin (PDO) under EU law. The small print of that PDO specifies that Stilton is made from pasteurized milk. Pasteurization, by definition, alters the microbiology of milk and so makes a different product from what was created and marketed on either side of The Great North Road in the 1700s. Schneider's position is that you can control Listeria in more subtle ways than killing all the microbes in the milk. But "You can come to my dairy, take pictures, take notes, copy everything you like. You won't know how to make my cheese. I don't know how to make my cheese". This is like trying to follow a protocol that is detailed in the Materials and Methods of a scientific paper. My old boss had a standard operating procedure SOP when her students couldn't make it work. She'd phone up the rival lab and ask if they'd host the student for a couple of weeks. More often than not, student came back with a working method. Not everything can be written down, including the invisible indescribable background certainties which make things work . . . of course you don't leave the eppendorfs in the ice after you add the primers.