We have all our descendants at home for a tuthree weeks, The Boy, Dau.I, Dau.II, Gdau.I, Gdau.II and a scatter of partners to make it not all about me. Simultaneously we are making a start on the 2021 Mountain Meitheal, whereby we trudge up the hill with our neighbours to alter the landscape a little. If there was no work-of-human-hand [and gob-of-sheep] up there, our dry-heath biome would quick enough revert to scrubby forest. This year we are again thrashing the ferns Pteridium aquilinum, because it is inedible to sheep and shades nutritious grass, forbs and heather from the best of the Summer sun. Turns out that a licence is needed to extirpate this species and that delayed the bracken-thrashing until it was much too late to be effective: the spores having come and gone and photosynthesis having replenished the fern's underground reserves.

But having started the process we are obliged to follow through with the actual work. On Friday last week, I was up with the lads including three women, doing a day's work with my scythe. Neighbours turned up with a variety of cutting implements small and large. A scythe is by far the best tool for this task if the terrain is half-way rock-free [don't need to be flat]. But ferns are chest-high and opaque and a >!ding!< of the blade on an invisible stone will quickly take the edge off the tool. Bracken stems are also rich in silica which will also insidiously blunt steel. It was a dry light-breezy sunny day, and it was delightful to still get paid while having a tea-break and catching up on the community gossip. Our Ecologist Tom the Plant has been for a few yomps up our hill, at least once with me trailing along. From his desk in Galway Tom marked out 3x 20 acre plots and shaded them in on a satellite map: 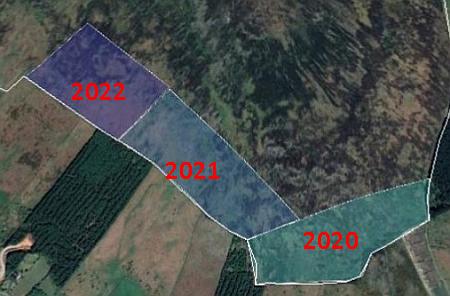 Which is fine and dandy in theory but a step or two removed from actual boots on the ground. My task was to transpose theory into a practical delimitation of of the area of obligation w.r.t. bracken cutting. 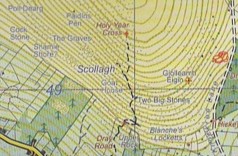 There are many ways to skin this cat, but my preferred was to use Barry Dalby's 'mazing 1:25,000 map of The Blackstairs [relevant fragment L]. The sections of forestry South and West of the Common are the only obvious waymarks on both maps . . . and the mountain wall between them, of course. But the lines are straight and it is math-trivial to change between the different scales on the two maps: a ruler with mm ticks is key! The most wonderful function in Dalby's cartography is an app with which you can a) zoom in and so increase the scale/detail b) follow a blue dot across the app-map which represents to location of the device c) a cross-hairs in the middle of the app-view reporting the Lat & Long of that position.

My transposition indicated that the 2021 quadrat marched along the 450m contour-line which runs parallel to the mountain wall and about 180m distant from that obvious feature of the landscape. All I had to do was attach flags to the top of a dozen bamboos and traverse that contour installing these markers at regular intervals. Easy sitting at the kitchen table; challenging on the ground having to juggle glasses, phone, paper map. bamboos; foolish to essay this task alone on a Sunday afternoon in August. A few Winters ago, a neighbour's sheep dog fell into a deep hole among the steep granite boulder scree which makes up the SW face of the hill of the face of our hill. His phone fell in after from his frozen hand and he was never able to return to the exact spot to recover other asset. Last year, I fell prostrate on the hill, my sim-free smartphone popped out of my shirt pocket and it took two people 30 minutes to find t'bugger. Me, Sunday, I fell into invisible fern-covered grikes three times. I only grazed my fist once and sustained no breaks or bruises, but each time I reflected that I was bouncier 50 years ago.