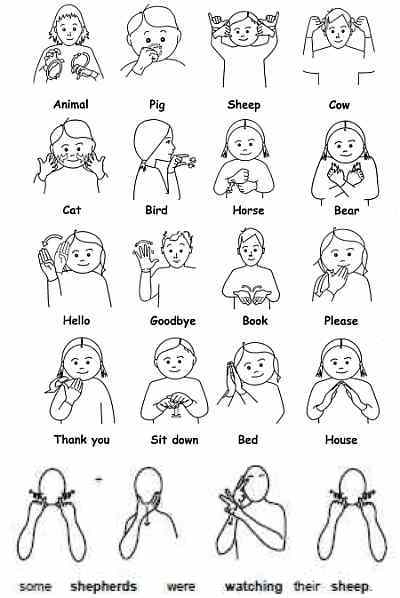 Come on, Bob; where's yo bin livin'? Under a stone? With your interest in Braille - Irish Sign Language which is very different from British Sign Language - American Sign Language - Ogham - Morse - Kanji - Unicode . . . surely you should have picked up on Makaton [words and sentence in which above] before this.

I'm in Makatonland because the oldest son of John and Sally Bercow [he's Speaker of the UK House of Commons; she is a celebrity in her own right] was diagnosed [early] with autism. He got an early identification and therefore appropriate intervention partly because he had two articulate, well-connected parents; but also partly because they all lived in Westminster which has allocated some resources to those issues. Without early intervention a youngster who is without language is fritzed for school and social life and work. Makaton came up because Sally B. included it in a list of things she embraced to do the best by her boy. He's doing fine now, thanks, he's in regular school, has tolerant friends, forgiving siblings and hopeful parents. He could have finished up clutching a blanket and rocking himself in a corner of a bleak institution. Autism is generally not high on the list of priorities for governments in allocating social / health resources. Heart transplants, yes; dairy farmer subsidies, yes; auditing educational attainments, yes; ministerial car, yes;; but council houses, nah; mental health, nah; sex education, nah; drink education, nah.

My pal Lulu worked for years in the catering trade and late in life landed a job as a care assistant in the National Rehabilitation Hospital NRH in Dun Laoghaire, Co Dublin. There were young men there who had come off motor-cycles at speed; had been patched up in A&E; and then discharged. Their physical and, especially, neurological deficits could be immeasurably improved by early and intensive intervention. While the damage was fresh it was possible to restore function, or by-pass lesions, or develop sustainable work-arounds. With each passing day, the fluidity decreased, systems hardened into sub-optimal troughs and it became increasingly impossible to achieve any substantial improvement. There is only one NRH in the state containing a finite number of beds but there is a mountain of rehabilitation need. The [terrible] solution is to eke out the resources 'fairly' so that nobody gets the full whack of treatment that will give them the best chance of a fulfilling and productive life after their disaster. Huge waiting time means that any treatment people get is too little, too late.
Posted by BobTheScientist at 07:28