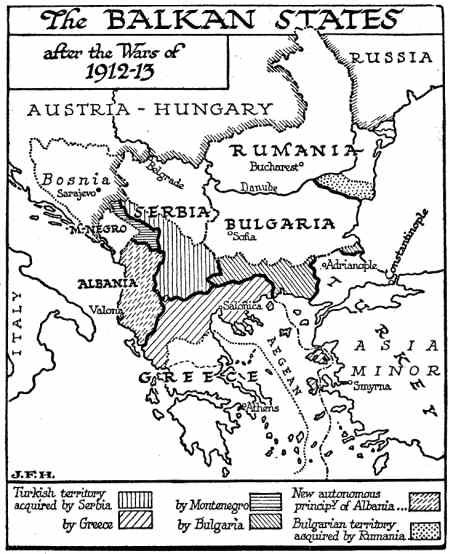 Let's waltz over to the other end of Europe and ask with AtlasObscura what-in-heck they speak in The Balkans. Like the whole Eskimos have fifty words for snow story, the answer to that question depends on definition. The word Balkan derives from the Balkan Mountains. which are located more on less where the word BULGARIA appears on the map above and [so?] the Balkan peninsula is defined as all the land South of where Ακρωτήριον Μαλέας / Cape Malea looks across at Κύθηρα / Kythera . . .  until it's not. Lots of Greeks would sweep their capes about them and leave the Balkans with a disdainful nothing to do with us, we're Greeks. Well I'm very sorry but if you participated in the Balkan Wars of 1912-1913 then you are part of the problem ... solution ... Balkans. In 1971, I knew a helluva a lot about the Balkan Wars because I was doing History at school in England and we pored over The Origins of the First World War in fine detail. 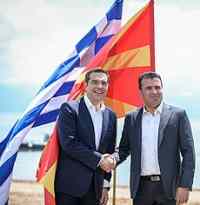 I was looking for a more recent map of the region, but couldn't find one that was free of political tinder. Is Kosovo a country? What do we call the part of Jugoslavia that was Socialist Republic of Macedonia? A recent treaty with the Greek government has agreed on Republic of North Macedonia Република Северна Македонија. Although there was a huge protest in Athens when the terms of the Treaty of Prespa [June 2018] were actually implemented in February 2019. My ear to the ground is my [Macedonian] Greek roomie at The Institute who explains patiently why those people north of the current Greek border have no rights to the heritage, symbols, names and history of Alexander the Great Greek. I button my lip. But Prime Ministers Zaev and Tsipras [L with flags] look young and tie-less so I have hopes that the agreement will stick . . . until the next national elections. 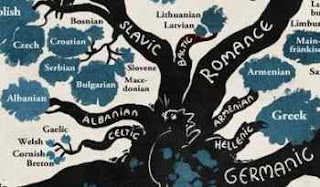 If Balkan is defined as participating in the Wars before The Great War, then the Balkan languages include Greek, Albanian and Romanian [all Indo-European R source]. The last, weird-and-wonderfully, is a romance language ultimately based on Latin although the Romans only occupied Dacia across the River Danube for only 200 years 2 millennia ago. It's a long way to Italy, France and Spain. Albanian is an Indo-European tongue but on a distant branch not really any more like Slavic tongues than Irish or Greek or indeed Romanian. There are two dialects Gheg in the North and Tosk in the South. Tosk is, as in happens, a co-official across the borrrder on North Macedonia because several isolated Toskan communities were the wrong side a dotted line drawn by [k]nobs a long way away at another peace conference. And that's the problem in the Balkans - as it is in Belfast - if you see The Other as a SWOT threat rather than a SWOT opportunity. Me, I'm delighted that you can buy pierogi, garbanzos, pizza, camembert and cilantro is Irish shops and anticipate that we'll soon be borrowing words from Yoruba and Polish. And tbh I don't care a jot-or-tittle what your position is on transubstantiation.

Jugoslavia was set up after WWI as the Kingdom of the South [југ-; jug-] Slavs as a grab-bag of melting pot left over from the Ottoman Empire. Say what you like about Ottomans they were tolerant of People of the Book [Jews and Christians, as well as Muslims] in a way that many modern countries are unable to manage. There were several instances in the Balkan Wars where local Jewish communities fled their homes with retreating Ottoman troops because they feared a pogrom from the victors. Where is the largest and longest established Islamic community in Europe? Bosnia where +50% of the people are Sunni Muslims.

That's not so much an introduction as a random ramble through the distant reaches of The Blob. Let's revenons a nos Slavs and Dan Nosowitz' Atlas Obscura ramble through SerboCroat. Part of the problem is that Serbs, because they tend to be Orthodox have adopted a цириллиц алпхабет [cyrillic alphabet] while Croats are Catholics and look to the West for their latinica orthography. The fresh Balkanisation of the region, polarised by the wars that followed the demise of Jugoslavia, has resulted is a lot of unhelpful further-polarising selective deafness. That chap in the sentry-box the other side of the border? I canna gripe a worrrd t'bugger says. Here's how hard it is: the universal declaration of human rights is very worthy and inclusive:
Can't see the diff, me. But, because of 'national' vanity and exceptionalism, you now get absurdities like Croat perps demanding a translator when up before the Serbian courts [and doubtless vice versa - I'm not going to be accused of demonising Croats]. It's like passportless folk from Oklahoma and Iowa insisting that the speak American rather than English. We've seen how you betray your origins by your usage of a very few words. Heck my own family segregates into Papishes and Planters. The unfortunate sectarians in The North cannot reliably identify the religion of their neighbours by their language or diction - they have twitch the net curtains to closely observe the school uniforms leaving the garden-gate next-door.
Posted by BobTheScientist at 07:26