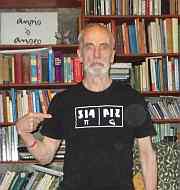 I am fond of intoning that Science is A way of knowing. Because I know that a lot of things that matter can't be measured; while many things that can be measured don't matter. Indeed the current obsession with measuring a record keeping can have a net negative effect on productivity. I left work last night (at 1704hrs) with our chief technician, for example, but she had to clock out with her work ID card as she left the building. Not me, I'm an officer teaching staff and my union wouldn't wear it! But our time is measured (in contact hours) in a number of mean-spirited, bean-counting ways that shout lack of trust from the management. The consequence of these impositions? A wide-spread reciprocation in kind: clock-watching; hour counting; least effort; minimal commitment; never stay beyond 1700hrs; never volunteer for extra duties; short-change the students on feed-back, marking, mentoring. I don't know of anyone who pilfers spoons from the staff canteen, but I could understand where they were coming from.

Science's way of knowing is to measure stuff and assemble evidence to make sense of the world. The spirit of the times is that only STEM is productive for the economy; none of those Arts-Block degrees are actually going to create jobs or swell the government coffers . . . so they're useless. This week is Research Week and there was a speed-dating session for researchers from the Two Institutes in the regions that the govt is trying to force into an arranged marriage. Shamefully they asked the contributors to prepare a 10 minute presentation and then, overwhelmed by subscribers, cut the time down to a rigidly chaired 5 minutes. Rigid chairing is generally A Good Thing: stops the class bore from droning on and on. But 5 minutes is rather disrespectful of any research that isn't wholly superficial. Ho hum, maybe the twitter soundbyte, low-attention-span, generation is now the new normal. And, I'm afraid to say that several of these fishing for interesting collaborators talks would have been unengaging if they'd gone on for another 30 seconds.

But one researcher shilling for someone to talk to; and maybe collaborate with, was interested in caring, how to, in the best possible way. Her interest started in her mother's head when the older lady suffered a disabling stoke  . . . and the speaker became her mother's primary carer . . . between the initial trigger in 2005 and the old lady's death in 2012. That's seven years of increasing dependence and closeness that was by this account pretty intense, generally exhausting and mostly positive. Less reliably positive was the couple's interaction with other people, protocols and institutions. A couple of years after her mother's death, Our Carer encountered an acquaintance whose mother was demented and wondered "how would our experiences compare?". From that question a research project was born


Hard to reliably measure happiness and well-being; and QALYs are in a sense an assault on the lived experience of sick people. But being a bit fuzzy doesn't mean that these "outcomes and deliverables" are not worth striving towards.


Posted by BobTheScientist at 07:21