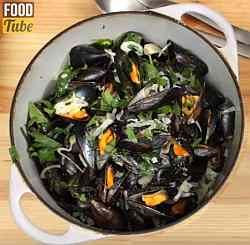 In the late 90s, when I was the Irish node of a European Quango, I had many occasions to fly to Brussels. I had a pact with myself that I would always eat mussels Mytilis edulis at least once while in Belgium; often as Moules Marinière. In the same time frame, I had several teaching gigs in Finland and, while there, put myself through a sauna. Growing up, we didn't eat invertebrates at all - not crab or lobster let alone molluscs; so moules were a challenge. And saunas hadn't been invented yet. I never got to enjoy sauna - because I'm not a suet pudding in need of steaming; but now I'll pick mussels off the menu even when not in Belgium. That's as if I spend a lot of time viewing menus . . . in restaurants. Heck, I don't even read the menu in the works canteen at The Institute; because my usual lunch is a cheese sandwich thrown together at home.

m'Sister came from England to visit for three days last weekend. We talked in an armageddon sort of way about Brexit and whether it was advisable to buy a large sack of rice and a smaller sack of lentils [like the lads from Chad] as a hedge against the end of the world. A year ago, two days of snow (and some panic buying of staples) totally disrupted the Irish food distribution system. Last Saturday was gorgeous and we went for a walk along the Barrow from Ballytiglea Bridge to where the Mountain River joins the much larger watercourse. That worked out well because we came up from the river in to the village of Borris just as ghrelin started growling about time for lunch, boss! Accordingly we walked up through town to The Step House for something to eat.  On enquiry, the chowder was reported as containing mussels Mytilis edulis and cockles Cerastoderma edule so The Beloved and I signed up for that. The Sister, who was, like me,  raised without shellfish but hadn't sojourned in Brussels, had a salmon salad. The chowder was quite tart - must be the lemon juice - which my food & fermentation microbiology training told me was 'off' but it went down a treat along with A Lot of home-made bread and home-made butter. It cost us each more money than my first weekly pay-packet from 1970, but was what the doctor ordered at that place and time.

Most of the items on the menu had allergen codes after them but there was no legend or footnote explaining what each thing meant. The Maitre d' was also all at sea as far as explaining them, which was ominous because the chowder had 6 or 7 potentially allergenic items. But The Compassionate Sister TCS bailed him out by suggesting that allergy-people [and out-numbering neurotics) would surely know what their own triggers were.  I was assured that these codes were mandated by the EU in the last year-or-so, so I came away without taking notes. It turned out not to be true that the EU had specifed the codes: here's the one letter codes used in Vienna:A = Cereals containing gluten; B = Crustaceans; C = Eggs; D = Fish; E = Peanuts; F = Soja; G = Milk and/or lactose; H = Nuts; L = Celery; M = Mustard; N = Sesame seed; O = Sulphur dioxide and sulphites; P = Lupins; R = Molluscs. That very different from what I clipped off this PDF menu from The Step House: Allergen Declaration: Gluten – G, Crustaceans – C, Eggs – E, Molluscs – M, Soybeans – S, Peanuts – P, Nuts – N, Milk – MK, Celery – C, Mustard – MD, Sesame Seeds – SS, Sulphites – SP, Lupin – L.  Whoa lads! There are only 13 items on the Step House list but the EU has flagged 14 classes of allergen. The Step House is refusing to acknowledge, or facilitate, people who are allergic to fish.

Consistency may be the hob-goblin of small minds, but I'd like the Step House to be sufficiently engaged with the allergen fad so that the flags on the menu can be matched to the explanatory footnotes. But that just ain't so: the Caesar Salad €9.50 Marinated Chicken, Cherry Tomatoes, Parmesan, Croutons, Caesar Dressing from the same PDF menu identifies seven allergens only 3 of which can be unambiguously matched to the list in the footnotes: FS, MS, CS, MK, G, EG, SP). Tsk! It is a legitimate position to put all the explanation on the wait-staff but if you're going to put it on the menu . . . and the internet . . . you need to get it right; or someone is going to sue your ass.
Posted by BobTheScientist at 07:27