I am the most terrible groupie for runners not least because I was terrible at it myself. I was 13 when I was last doing competitive athletics as part of my very expensive education.  I was okay at short distances: 80m hurdles or 100m sprint and I could give it a lash. Anything longer than 200m and my arse-ma, lack of stamina and, indeed, lack of bottle would keep me from the medals - indeed it was uncertain if I would even finish. I am still incredulous at someone like Emil Zatopek winning 5000m, 10,000m and the marathon in the 1952 Olympics. And I was all-over flutters when I met Ronnie "Gold 1956" Delany in The Institute at the end of last year.  From my sofa, it seems clear that the race often goes to the one who believes he will win or perhaps the one who is just running rather than running against someone else.  There are a few famous cases where a distraction from the pure act of running (like looking for the opposition) has lost the race, like Bannister passing Landy in 1954. 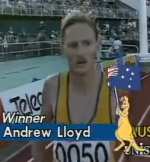 I've mentioned before the 10,000m between Lasse Viren and Emiel Puttemans in Munich 1972. Puttemans makes his push on the final turn and seems to be about to reel in and overtake; but in a blink Viren kicks out and sails away leaving Puttemans and everyone else standing. It was Puttemans' birthday 08/10/1947 last week. I think we all like it when the front runner has victory snatched away at the last moment; it shows that the race ain't over till the race is over. In 1990 there was a bravado run by a now little-known athlete, born in England but running for Australia in the Commonwealth Games. Andrew Lloyd was really a marathon runner but, like Zatopek, he was the kind to give any race a go if he could. Two laps out, the race seemed to be sewn up by long-distance god John Ngugi who was 50m ahead of the pack despite having taken a tumble early in the race.  But watch Lloydy put on the turbo-charger and set out after the leader to be sure of a medal, until in the last steps of the race he surges past Ngugi out to win Gold.
"What a sensational performance from Andrew Lloyd" indeed!
Posted by BobTheScientist at 07:24