The sin in him

In 1984 in Ireland there were a couple of famous cases where young women were treated despicably because they were got with child outside of holy matrimony.  Joanne Hayes was able to escape the full vindictiveness of the Law by the fluke that a dead baby, of which she was believed to be the mother, turned out to be totally incompatible w.r.t. the ABO blood groups. Anne Lovett was less fortunate and finished up dead along with her child, at least partly because her community lacked compassion for her condition. For reasons that will surprise no woman born in the 20thC, the man in the got with child equation was effectively given a get out of jail free card. In 20thC Ireland the burden of sin was distinctly asymmetrical . . . still is. 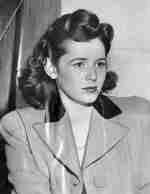 One of the few cases where a rich and powerful man was hounded for illicit paternity concerns Charlie Chaplin. In 1941, when she was 22 and an aspiring actress Joan Barry [L] started a sexual relationship with Chaplin, then 52 and a magnate in the movie business. Two years later after an up-and-down on-and-off relationship, Barry give birth to a daughter. The child's grandmother sued Chaplin for paternity, the case came to court, Chaplin was declared guilty and required to support the child. Fair enough, except that, as with the Kerry Babies case, that child, that mother and that father made a genetically impossible triad. Chaplin was Gp O; Barry was Gp A and the child was Gp B. As I showed the other day, the exclusion table [below] says that Chaplin and Barry could have Gp A kids or Gp O kids but couldn't have created the child's B antigen no matter how hard they went at it.

It turned out that genetic evidence was not admissible in California courts at the time so Chaplin's best line of defense couldn't be considered by the jury but in some ways the whole procedure was a show trial pour encourager les autres not to support communist Russia as Chaplin was alleged to have done. It is, of course, ironic that the USSR was allied with the USA in the middle of its Great Patriotic War Вели́кая Оте́чественная война́. The other irony is that one of the reasons the FBI feared and hated Stalinist Russia was because of its predilection for show trials. The third irony is that, in the most famous case of a powerful bloke being made responsible for an illegitimate child, it definitely wasn't his child.
Posted by BobTheScientist at 07:24