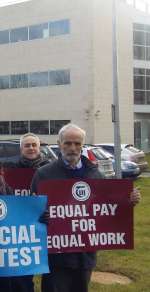 Since I started working at The Institute, I've been a member of The Union [L looking serious and committed]. I joined for the same reason as I pay my taxes: it's being part of your local community. I managed all my previous working life without joining a union and paid my dues more directly: by being committed to my work and helpful to my colleagues and by throwing mighty parties near the Summer Solstice and/or on Darwinday. At base, I think that professional unions are a bit peculiar: the labour relations and pay-and-conditions which academics experience are not quite on the same scale as Robert Tressell's The Ragged Trousered Philanthropists or Upton Sinclair's The Jungle; let alone the sweat-shops where they make my shirts and your trainers.

In the wake of the Great Crash of 2008, the Irish Government decided to indemnify the Banks for their reckless pursuit of profit and simultaneously gouge public employees because there was insufficient money to pay everyone what they had come to expect in the Good Times. I'll simplify what happened but basically the Gumment and the key public-sector unions sat round a table and agreed a) that the economy was shafted and b) about how much there was in the kitty to pay the bloated bureaucracy that is the Irish civil service. It takes 300,000 people to run a piddling nation of less than 5 million citizens on the fringes of Europe. The Brits ran their Empire in India with a work-force of about 1,000 people to manage a population about 60x bigger. aNNyway, the lads round the table at Lansdowne Road and Haddington Road, in an effort to win the best deal for their members, acceded to a shameful arrangement which threw the weakest members of their constituency under the bus of negotiation. People who started their contract or or after 1st January 2011 - who were already most likely starting at the bottom of the pay scale - would have their pay docked 10%. And it was so. I started in January 2013 and would have had to suck that up; but for the fact that I had worked for 2 hours a week at 2/18ths of a proper salary between January 2006 and May 2007. That fragment of work was enough to qualify me as an olde tyme employee rather than a beginner, which fluke got me 10% more cash each month.

It didn't have to be like that. When I was working in ship-building and coal-mining territory (as a lily-liver panti-waist desk-monkey) the Unions were about solidarity with your fellow-workers and with your class. You'd sacrifice time and money to prevent another worker from being abused or exploited. The public-service unions could have done that in the negotiations of 2010,11,12. Brothers & sisters we'll all take an x% pay-cut to share the losses equally. But nope, the negotiators, who had to accept some cuts in pay and additional work aNNyway, tried to minimise the loss of those who had most already by putting additional sacrifice on
the least-well paid
= those who were starting work in a new field
= those who were running like mad to keep abreast and learn their trade
= those who needed care and support and mentoring
so that the established workers could have their foreign holidays and lattés on the job.
More recently, as the destructive tsunami of the crash, the bail-out, and austerity started to recede, the union has started to talk large and indignant about the plight of those at the bottom of their profession. Yesterday, on St Brigid's Day 2018, almost exactly 2 years since we called a one day strike in 2016, my union called a 20 minute protest at lunchtime. The membership of the union's Local branch felt so strongly about this that 19 of them/us downed sandwiches and walked along the pavement outside The Institute. Here we all are: a placard for everyone in the audience:

I forbear to show a better picture because it would betray the fact that we are all having a great time: chatting to our radical pals, acknowledging some desultory toots from passing motorists and getting into reasonably fresh [=chilly] air. My poster read equal pay for equal work which is an aspiration a long long way from actual practice. Quite apart from shafting the vulnerable as explained above, the principle of more money for older people is embedded in the pay structures of the profession. If you really believe that older people are better teachers than their junior colleagues then you have forgotten who your role-models were at school. Older is better is the only utilitarian justification for older gets richer.  So right at the core of the teaching profession equal pay for equal work is thrown out the window. But it gets worse: there are two scales in the sector: Lecturer and Assistant Lecturer. It is streng veboten that someone hired into the field, whatever their age, experience and qualifications in the Real World will start in on the Lecturer scale. We all have to serve our time as ALs whether we are 25 or 55 years old. The teaching load is brutal, especially if you are new and are developing material as you go. A compassionate and/or utilitarian case could be made that ALs are paid less, okay, but also have slightly fewer hours of contact time until they find their feet. Au contraire: as well as getting more money, the Lecturers cover 2 hours less a week than their juniors. WTF?! If the better teachers are the older teachers why are we exposing less of them to the students??

Here's the logical take-home message: teaching is considered a hateful chore and you are eventually rewarded for the slog by being allowed to do fewer hours as you become the patriarchy. Not me, mate! Even at the beginning, when I started five years ago and was having to remember science I learned 40 years prior and was often only 24 hours ahead of the students, it has been the most tremendous fun. Now it is easy as well as fun. I'm teaching the same courses as last year, I know where the toilets are; I've found the quietest part of the canteen; and I've developed systems to make my life easier and more efficient. I'd be happy to take two hours off the chap who started four weeks ago and looks really eye-flicking stressed a lot of the time. But the union expressly and explicitly forbids members to do more than their maximum allotted hours in any one week.
Posted by BobTheScientist at 07:37