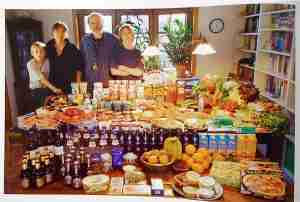 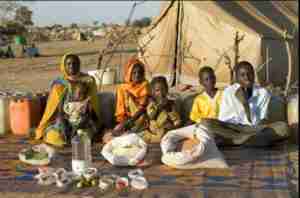 Admittedly the lads from Chad are refugees but the local family is not conspicuous for extent of its larder. The last link displays at least a dozen countries by week-food. It may be more difficult to live on $4 / day in NYC than it is to live on $1 a day in Chad. It's well known to obesitologists that it's cheaper to eat badly in America than to eat well.

What about a wider exploration of standard of living round the world - the stuff that folks have is a better indicator of relative wealth than comparing income at the current US$ rate of exchange. We all know food is cheaper in Chad than in German. Dau.II sent us a link to Dollar Street at Gapminder.  You'll be familiar with Gapminder at least in its spokesman Hans "Data-display" Rosling, who died a year ago [obit]. Here is Anna Rönnlund explaining how Dollar Street works. The idea is to send photographers out to 250+ family homes in 50 countries to capture a specific list of material goods which you more or less have to possess as a member of the human race. Most homes have something to keep the rain off; something to keep stray dogs out; a place to sleep and a place to sit; a place to cook food, and something to eat it with; somewhere to shit; a pair of shoes; paper and something to write with; something cherished. Dollar Street is all clickable and comparable.

The quality and abundance of the items enumerated and recorded is dictated far more by economics than by geography. A middle class bedroom is essentially the same in China as in Canada and very different from the same thing in a house on the other side of the tracks in the same town. None of this is exactly surprising but it brought me up short (and grateful) aNNyway.