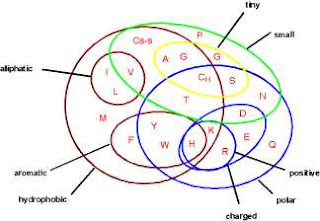 The diagram above, largely due to Willie Taylor, is perhaps the most important chunk of infrastructural information in molecular biology. I've been here before with The Masters of Imm. It shows the common ground as to size, electrical charge, solubility among the 20 amino acids which make up proteins. A 'conservative substitution': is a change in the inventory of amino acids AAs that will cause least structural change to the constituent protein: roughly called if/when two amino acids appear in any one of the gathering-together circles. But some are more conservative than others! Leucine L and isoleucine I are essentially the same; whereas Glutamate D and Lysine K are both 'charged' but one is negative and the other positive, so they are not quite the same. How to quantify this? One way is to count the number of changes in the underlying DNA that will result in a change of amino acid. 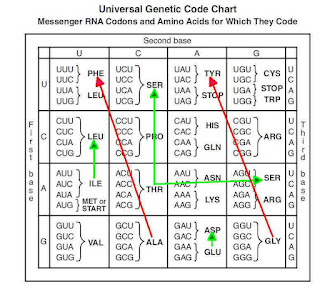 green-for-go arrows are AA changes that require only a single change in the DNA, red-for-harder are examples where two changes are needed and some amino acid substitutions require three changes: there is NO commonality in the codons for TRP and ASP or between CYS and MET. It was long ago noted that conservative substitutions tend to be in the same row or column - they involve only a single change to the DNA.  That has implications for the evolution of the genetic code from a simpler arrangement with fewer amino acids which got more complex through a series of mutations which were found to have utility wrt survival and procreation. Perhaps more importantly it provides a bit of stretchability and robustness: few substitutions are going to create huge waves in the structure and integrity of the protein: UCC = Ser to ACC = Thr just adds a small methyl group to the AA side-chain; UAU = Tyr to UUU = Phe still results in a large aromatic hydrophobic amino acid. In other words, the genetic code is not really a 'frozen accident' but is extremely non-random.

These issues are teased out at length by Koonin & Novozhilov here [for free]. They have bearing on the problem of measuring similarity which is currently engaging some of my students in their final year research project.


Posted by BobTheScientist at 07:52