Antipodean at the poles

Girls have to put up with so much crap, so much of the time, that it is sometimes a wonder that they get out of bed in the morning. I'm not sure I'd have the bottle to face into the day knowing that someone, probably several people, would disrespect me before tea-time. I'm super-proud of my daughters for not letting it prevent them from getting on with life and what it throws at them. I heard a great story the other day on Metafilter about a young Australian called Jade Hameister. In 2016, at the age of 14 she hauled herself and her own weight in sled, food, fuel and shelter 150km across the Arctic ice to the North Pole. You don't get a lot of snow in Melbourne and the only prior ski experience she'd had was a three day trip to New Zealand. But she built her polar stamina by hauling a couple of truck-tires up and down a beach [see R] nearer home.

The following year 2017 she traversed the Greenland ice cap adding another 550km to her ice-miles. Two weeks ago, she completed the Triple Crown by schlepping another 600 km to the South Pole, and she'll turn 17 this coming June. That's a mighty paragraph to have on your CV before you're old enough to vote. It reads like terkking to the North Pole was a sort of inconsequential starter - the sort of thing any 14 year old could do if they had the chance. But you and I know that is just not true - there are a gazillion reasons for not doing something: too far, too hard, too expensive, can't be summarised in a tweet. But Ms Hameister wanted to do some polar trekking and she did it. She has an explicit message to other girls to not be disempowered by other people's expectations . . . or your own. But I'm unconvinced by her earnest articulation of her ideas in the context of a TEDx talk: it is classic TED-fodder: inspiring, inspirational and funny - all the tags can be applied. 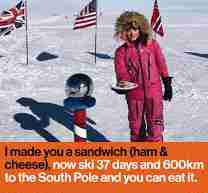 What I loved was her response to some anonymous troll who, between nursing a beer and his haemorrhoids from his fat-arse sofa, suggested she "shut up and make me a sandwich". I just gave an example of similar sour comments in the world of young science. When Jade arrived at the South Pole she snapped herself with a sandwich and invited her critic to come out into the cold and eat it. How cool is that? Much admiration, tempered with hilarity, in the comments on MeFi. Also some serious discussion on whether it is advisable to 'feed the trolls' or by ignoring them hope that they will go away. Me, I'm with those who are partial to the devastating sassy put down, even when it requires trudging 600 km to make it happen.

Do I wish that Dau.I and/or Dau.II would do something similar? Not at all: can't have everyone clogging up the Poles. As I say above, I'm full of admiration that they do quite ordinary things with integrity - and a bit of passion if that fits the bill.
Posted by BobTheScientist at 07:50