Be kind and eat ice-cream

Whatever the medical speciality, if the sample size is big enough there is room for a cross-disciplinary post. For Alastair McAlpine, a paediatrician from Cape Town, he realised that he had no formal training in end-of-life issues, so he took a course in palliative care, to make easier the last weeks of life for those who have barely started out on the journey. Draw a Venn diagram to estimate how many people are likely in the intersect between palliativicians and paediatricians. Outside of paediatrics, many doctors are out of their depth in dealing with the dying and/or their anxious and demanding rellies. Actually, if the orthopaedic surgeon who fixed me up after my RTA is anything to go by, many doctors are crap at inter-personal relationships. I know he was wonderful at triage, bone-setting and diagnostics because he saved the life of a friend of mine after another far more serious RTA. But he treated me like scum a specimen.  Didn't bother me much - I'm an articulate, over-educated SWM with a PhD - but I had a moment of bloody froth at the thought that he would thus address the elderly one lady owner of a broken hip who was next in line for his ministrations. 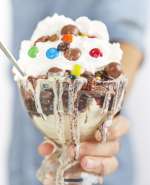 aNNyway, Dr McAlpine has been deep listening to his young charges to try to work out how he and his staff can best serve these poor wee scraps of humanity.  Bronnie Ware became a star with the chatterati in 2015 when she published her book The Top Five Regrets of the Dying: A Life Transformed by the Dearly Departing. She'd seen enough people through the portals to be able to find some common threads in what we are likely to be concerned about as we approach "that bourne from which no traveller returns". Now Dr McAlpine has asked what regrets kids have when they are on their home run. His assessment is that kids go back to basics: it's not about telly or social media, it's about their pals and their pets and their parents . . . and ice-cream. There is always room for ice-cream; and hospitals are so awash with gross fluids that nobody is going to mind if you drip some sundae on the sheets.  Here are some quotes:
via BBC
Posted by BobTheScientist at 07:56