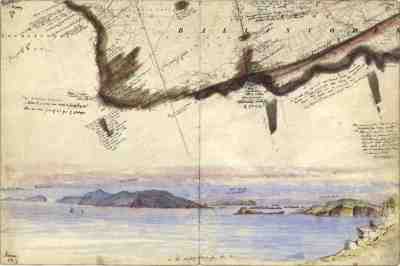 We were in Cork for much of the weekend, visiting with Dau.II. That always involves a visit to The English Market to purchase delectable eatables. I don't think there is anywhere else in Ireland more likely to make you fat just be sniffing the air.  But we also spent some time in Vibes and Scribes the best independent bookstore in Munster - it's new, remaindered and second-hand with something readable for every taste and every pocket.  But the high-light of our excursion to the city was a visit to The Crawford Gallery. This is like Bath's Victoria Art Gallery where we had fun last July: imposing wooden staircase, creaking wooden floors, immobile custodians, dark oil paintings, careful lighting. Their current exhibition is Stones, Slabs and Seascapes: George Victor du Noyer's Images of Ireland. It has been sponsored and facilitated by the Geological Survey of Ireland for whom du Noyer worked for 20 years. His job was to capture what the landscape looked like in the middle of the 19thC, which he did in thousands of pencil sketches and beautiful and informative water-colours. The copiously annotated map and view of Slea Head and the Blaskets at the head of this post [lifted from] is just one of GVduNoyer's view of the coastline of Ireland. As handsome and accomplished a meeting of Arts and Science as you might hope to find in a field note-book. 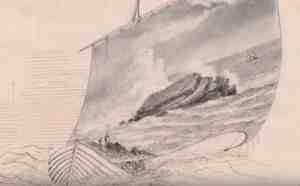 This is a picture of Sovereign Islets; a navigational hazard at the entrance to Oyster Haven in Co Cork. It appears as tiny inset in a corner of the map of that part of the coastline. du Noyer chose to depict the reef on the canvas of a small ship in a storm at sea. He didn't have to add that touch of whimsy, but I am so glad he did. It's the kind of detail that cannot be captured by a photograph. And it definitely can't be captured from a car: you have to get out in the landscape to really see what it's made of. For one thing, wet rocks reveal more geological detail than when they are dry, so your note-books need to be rain-proof.

I had bit of a chat with one of the curators at the Crawford when I went over to express my appreciation of the exhibition. In my day, I said (before the First War in unspoken parentheses), we had to draw what we saw down the microscope - because it was the only way to capture the information. I was thus essentially of the same generation as du Noyer, despite him being born 140 years earlier.  He drew the grand, I drew the tiny and both finished up on a sheet of paper about A4 in size.  Harrumph, I went on, my students at The Institute just capture the view down the microscope with their smartphone, print it out and stick it in their lab note book. No intellectual processing required! A good drawing can render the overall shape and appropriate levels of detail all on the same page - but that requires the mind to understand and the pencil to interpret what the eyes see. Even if more or less in focus a microphoto is little more than a pink or green blur as far as its information content is concerned.

du Noyer died in January 1869, in harness, in Antrim, of scarlet fever - an infection by Group A Streptococcus aka GAS, which has more or less disappeared from the experience or doctors and parents, thanks to the inroads made by penicillin and other antibiotics. One of his daughters died in the same week of the same dread disease back home in Dublin. Scarlatina also killed Charles Darwin's youngest child and rendered Annie Jump Cannon deaf - which handicap may have helped direct her career to astronomy.  It is not impossible that such tragedies will become commonplace again as we run out of therapies against once and future common deadly diseases.

150 years dead, du Noyer's sketches still speak to us so that we better understabd what we see in the landscape of Ireland.  His life and walks was the hook for a BBC documentary series on the landscape and history of Ireland in 2015. The best on-line source to show the extent of his works and talents is roaringwaterjournal.
Posted by BobTheScientist at 07:25